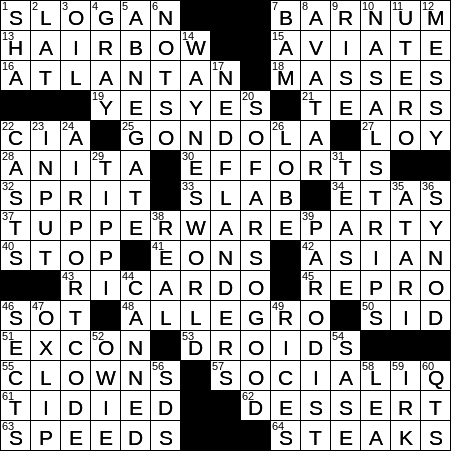 The musical “Barnum” is based on the life of the showman P. T. Barnum. Given Barnum’s profession, the musical is unusual in that it prominently features entertaining circus acts. The original Broadway production opened in 1980.

Phineas Taylor “PT” Barnum was one of the great American showmen, and was famous for founding the Barnum & Bailey Circus. By some measures, Barnum was the first ever “show business” millionaire. Beyond the world of entertainment, Barnum was also a politician for a while and served two terms in the Connecticut legislature, and was mayor of the city of Bridgeport. Barnum was a very successful author as well. One of his most famous books was “The Humbugs of the World”, an exposé of deceptions in the world of entertainment. He was a believer in illusions, providing they gave value for money in terms of entertainment. However, Barnum had an intense dislike of fraudulent deception and came down hard on spiritualist mediums in particular.

“Chopper” is an informal term used for a helicopter.

16. Many a Falcons or Hawks fan : ATLANTAN

18. “Huddled” group in an inscription on the Statue of Liberty : MASSES

Emma Lazarus was a poet from New York City who is best known as the author of an 1883 sonnet “The New Colossus”. “The New Colossus” sits on a bronze plaque inside the pedestal of the Statue of Liberty, a fitting location given that the title refers to Lady Liberty.

Not like the brazen giant of Greek fame,
With conquering limbs astride from land to land;
Here at our sea-washed, sunset gates shall stand
A mighty woman with a torch, whose flame
Is the imprisoned lightning, and her name
Mother of Exiles. From her beacon-hand
Glows world-wide welcome; her mild eyes command
The air-bridged harbor that twin cities frame.

Keep, ancient lands, your storied pomp! cries she
With silent lips. “Give me your tired, your poor,
Your huddled masses yearning to breathe free,
The wretched refuse of your teeming shore.
Send these, the homeless, tempest-tost to me,
I lift my lamp beside the golden door!”

The word “jag” is used to describe periods of unrestrained activity, particularly involving alcohol, and has been in use since the 1800s.

In the hit television show “I Love Lucy”, Lucille Ball and Desi Arnaz play Lucy and Ricky Ricardo. The Ricardos’ best friends are also their landlords, Fred and Ethel Mertz. The Mertz’s are played by William Frawley and Vivian Vance.

A Napoleon is a French layered pastry that is often called a “mille-feuille” on the other side of the Atlantic. “Mille-feuille” is French for “thousand-leaf”. The origin of the “Napoleon” name is unclear, but is thought to derive from the French “napolitain” meaning “from Naples”. The shift to “Napoleon” perhaps took place during the reign of Napoleon I, although there is no direct connection to the emperor.

Outback Steakhouse is a chain of restaurants that was established in 1987, with the first Outback opening in Tampa, Florida. Outback serves largely American food in an Australian-themed dining locale.

The Idlewild Golf Course was taken over by the city of New York in 1943 and construction started on a new airport to serve the metropolis and relieve congestion at LaGuardia. The Idlewild name still persists, even though the airport was named after Major General Alexander E. Anderson from the first days of the project. When the facility started operating in 1948 it was known as New York International Airport, Anderson Field. It was renamed to John F. Kennedy International Airport (JFK) in 1963, one month after the President was assassinated.

Tippi Hedren is an actress from New Ulm, Minnesota who is best known for her starring roles in two Alfred Hitchcock classics: “The Birds” (1963) and “Marnie” (1964). Famously, Hedren claimed that Hitchcock destroyed her movie career because she would not succumb to his sexual advances, a charge that has been denied. Hedren’s daughter is actress Melanie Griffith.

35. Creator of the game Centipede : ATARI

Our use of the word “conclave” as a private assembly comes from its original use with reference to the papal conclave, a meeting of the College of Cardinals to elect a new Pope.

47. Wildflower of the primrose family : OXLIP

The “primrose” name comes from an older term meaning “first rose”, reflecting the fact that the primrose is one of the first plants to flower in spring in Europe. That said, the primrose is not very closely related to true roses.

The quart, the unit of volume, is so called because it is one quarter of a gallon.