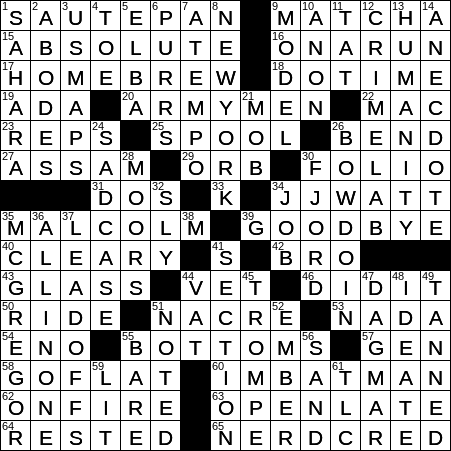 Today’s Theme (according to Bill): X-Word

[Note that my grid is incorrectly numbered in the bottom half. That’s because I solved online, and not with paper.]

Absolute zero is a temperature that can be reached theoretically by removing all the “energy” of the test vehicle that is being “frozen”. This temperature is designated as 0 degrees on the Kelvin scale, equivalent to -273.15 degrees centigrade. Scientists try to get as close to absolute zero as possible because matter has weird and wonderful properties at such cold temperatures, such as superconductivity and superfluidity.

Our verb “to genuflect” means “to bend the knee, in worship”. The term comes to us via French from the Latin “genu” meaning “knee” and “flectere” meaning “to bend”.

J.J. Watt is an American football defensive end who was drafted by the Houston Texans in 2011. Watt was the first player in the NFL to record two 20+ sack seasons in a career. J.J.’s younger brother is Derek Watt, a fullback for the San Diego Chargers.

34. Who said “If you’re not ready to die for it, put the word ‘freedom’ out of your vocabulary” : MALCOLM X

Definitions vary, but it seems that the term “Generation Z” is reserved for the children of “Generation X”, and for the generations that follows the “Millennials” (Generation Y).

1. Name that comes from Arabic for “desert” : SAHARA

7. At the original speed, in music : A TEMPO

The Ford Model T was the first really affordable car that was offered for sale, and it was produced from 1908 to 1927. It was the Model T that ushered in the era of assembly line production, which greatly cut down the cost of manufacture. The Model T’s engine was designed to run on petrol, kerosene or ethanol. Ford stated in 1909 that “Any customer can have a car painted any color that he wants so long as it is black”. In actual fact, from 1908 through 1913, the Model T wasn’t available in black, and only grey, green, blue and red. The “black only” strategy applied from 1914.

The Model X is an all-electric crossover SUV made by Tesla Motors in Fremont, California. The Model X is built on Tesla’s Model S sedan platform.

13. What Gandhi once likened to an ocean : HUMANITY

“Dagmar” was the stage name of American actress Virginia Egnor. Dagmar did a lot of sketch comedy on television during the fifties on the likes of “Milton Berle’s Texaco Star Theater” and “The Bob Hope Show”. She even recorded a novelty song called “Mama Will Bark” with Frank Sinatra. Dagmar was a busty young lady and as a result she lent her name to the chrome bulges on the front bumpers of some cars in the fifties.