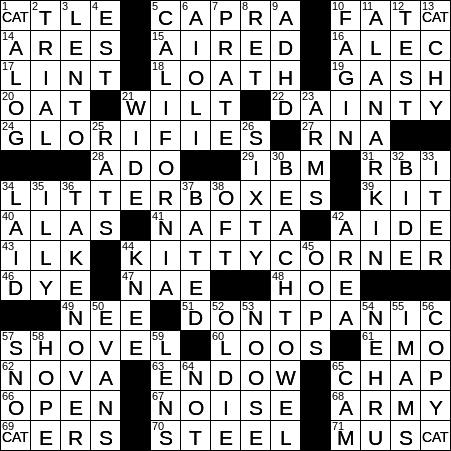 Constructed by: Sophia Maymudes
Edited by: Will Shortz

Themed answers include the letters CAT located in one of the four corners of the grid:

I can’t tell you how many of Frank Capra’s movies are on my list of all-time favorites. He directed such classics as “It Happened One Night”, “Mr. Deeds Goes to Town”, “Lost Horizon”, “Mr. Smith Goes to Washington”, “Meet John Doe”, “Arsenic and Old Lace” and the holiday favorite “It’s a Wonderful Life”. Capra was the first person to win three directorial Oscars: for “It Happened One Night”, “Mr. Deeds Goes to Town” and “You Can’t Take It With You”. Capra also did his bit during WWII, enlisting just a few days after Pearl Harbor was attacked. Given his great talent, and the fact that he enlisted at the relatively advanced age of 44, the US Army put him to work directing 11 documentary war films in the “Why We Fight” series, for which he was awarded the Distinguished Service Medal.

14. Father of Deimos and Phobos, in Greek myth : ARES

“The Boss Baby” is a computer-animated comedy film released in 2017. It’s all about the love for puppies and babies, and is apparently very funny. Alec Baldwin voices the title character. The film is loosely based on picture book of the same name by Marla Frazee that was published in 2010.

The North American Free Trade Agreement (NAFTA) is between Canada, Mexico and the United States. When NAFTA came into force in 1994, it set up the largest free trade zone in the world.

44. Diagonally … or a hint to four of this puzzle’s squares : KITTY-CORNER

“Kitty-corner” means “diagonally opposite”. The term is used mainly in the north and west of the US.

46. Ingredient in many a breakfast cereal : DYE

Muscat is the capital of Oman. It lies on the northeast coast of the state on the Gulf of Oman, a branch of the Persian Gulf.

2. High point of “To Kill a Mockingbird” : TRIAL

A lento passage is a piece of music that has a slow tempo. “Lento” is Italian for “slow”.

6. Sauce with a vowel-heavy name : AIOLI

9. Reason for an Adderall prescription, for short : ADHD

Fagin is the colorful antagonist in the Charles Dickens novel “Oliver Twist”. Fagin leads a band of children who earn their keep by picking pockets and committing other petty crimes. Fagin’s most successful pickpocket is the Artful Dodger.

The actor Alan Arkin won his only Oscar (Best Supporting Actor) for his role in “Little Miss Sunshine” from 2006, a movie that I just did not understand …

In the world of “Harry Potter”, Harry’s mother was Lily Potter nee Evans. Lily Evans had magical abilities, even though she was born to muggles, individuals with no magical powers. Lily married James Potter.

53. Alternative to a guillotine : NOOSE

A Nehru jacket is very like a regular suit jacket, except that the collar buttons at the neck. It was originally created in the 1940s in India, and then marketed as the Nehru jacket in the west in the sixties. The name Nehru was lifted from Jawaharlal Nehru, the prime minister of India from 1947 to 1964.

Barack Obama’s 2008 presidential campaign focused on the themes of hope and change. The future-president also wrote a book called “The Audacity of Hope” that was first published in 2006.

Cams are wheels found on the camshaft of a car’s engine that are eccentric in shape rather than circular. The rotation of the cams causes the intake and exhaust valves of the cylinders to open and close.