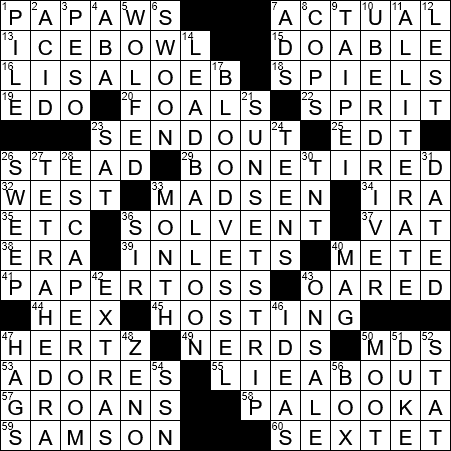 There are seven living species of mammals in the genus Equus, each of which is referred to as “equine”. The seven species include all horses, asses and zebras. All equine species can crossbreed. For example, a mule is a cross between a male donkey and a female horse, and a zorse is a cross between a zebra and a horse.

33. Virginia who was nominated for an Oscar for “Sideways” : MADSEN

“Sideways” is a marvelous 2004 film that is an adaptation of a 2004 novel of the same name. In fact, “Sideways” is the first in a trilogy of comedic wine-themed novels by Rex Pickett, and was followed by “Vertical” (2010) and “Sideways 3 Chile” (2015). The “Sideways” movie stars Paul Giamatti as a depressed teacher and writer accompanying his friend on trip through wine country prior to that friend’s upcoming wedding. Great stuff …

To “mete out” is to distribute by allotments. The verb comes from the Old English word “metan” meaning “to measure”, which is also believed to be the root of our word “meter”.

When German physicist Heinrich Hertz first demonstrated radio waves in 1887, he used the simplest form of antenna, namely a dipole antenna. A dipole antenna comprises two metal rods that are usually pointing away from each other. ideally, the length of each rod is set at one half of the wavelength off the signal to be received.

59. One strengthened by locks? : SAMSON

Cuba is the only country in the world that has two official currencies. The Cuban peso (CUP) is referred to as the “national currency”. Government workers are paid in CUPs, and CUPs can be used to pay for government-provided services and price-controlled items such as fruit and vegetables. There is also the Cuban convertible peso (CUC) that was introduced in 1994, when its value was pegged to the US dollar. Most products available in stores are imported, and have to be purchased with CUCs. Cubans with access to CUCs, like hotel workers interfacing with tourists, they tend to have better lifestyles than government workers in general.

4. What briefs are delivered in, in brief : ABA

9. Foreign capital whose name sounds like a blood grouping : TAIPEI

Taipei (officially “Taipei City”) is the capital of Taiwan (officially “the Republic of China”). “Taipei” translates from Chinese as “Northern Taiwan City” and indeed, the capital is situated at the northern tip of Taiwan. The city is nicknamed “City of Azaleas” as flowers are said to bloom better in Taipei than in any other city on the island.

I used to watch “77 Sunset Strip” as a lad growing up in Ireland. It is an American show that ran from 1958 to 1964. Two of the central characters are former government secret agents, now working as private detectives. Efrem Zimbalist, Jr. plays Stu Bailey, and Roger Smith plays Jeff Spencer. And who can forget Kookie, played by Edd Byrnes? Years later, Byrnes played smooth-talking TV dance show host Vince Fontaine in the 1978 movie “Grease”.

“D4” is an abbreviation for “four-sided die”.

The three witches in Shakespeare’s “Macbeth” have some lovely lines as they boil up and evil brew and cast a spell:

That would be the “sport” of boxing.