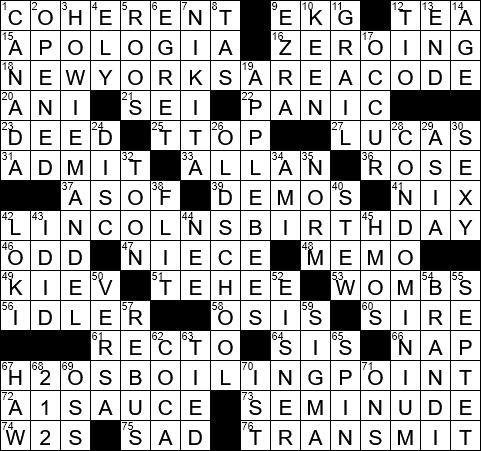 Themed answers all relate to the number 212:

An apologia is a formal apology, or a formal defense of one’s beliefs.

The tropical bird called the ani is related to the cuckoo, although anis don’t go around robbing other birds nest as do the cuckoos.

21. Number between cinque and sette : SEI

Allan Sherman was a comedy writer and producer who made a name for himself singing song parodies in the sixties. Sherman’s most famous novelty song was called “Hello Muddah, Hello Fadduh”, which became a hit single in 1963. The tune of the song is Ponchielli’s “Dance of the Hours”. The lyrics are a letter written home by a boy away at summer camp, which start out with:

Hello Muddah,
Hello Fadduh.
Here I am at
Camp Granada.
Camp is very
entertaining.
And they say we’ll have some fun if it stops raining.

Abraham Lincoln was born in a one-room log cabin in Hardin County, Kentucky making him the first president born in the West. His formal education was limited to a year and a half of schooling, but fortunately for us, Lincoln was an avid reader and educated himself over the years. Even though he was from a rural area, he avoided hunting and fishing because he did not like to kill animals even for food.

47. Relative whose name sounds like a city in France : NIECE

The Dnieper River rises in Russia, and travels through Belarus and Ukraine to empty into the Black Sea.

The suffix “-osis” is found in medical terms. The suffix indicates a disorder in general, with the prefix providing more specificity. Examples are silicosis (a lung disease caused by the inhalation of silica dust), and psychosis (a serious mental illness). The plural of “-osis” is usually “-oses”, but “-osises” is out there as well.

Ely Cathedral is a famous and beautiful church in the city of Ely in the county of Cambridgeshire. There is a Gothic door on the north face of the cathedral that was designed by Sir Christopher Wren, the man famous as the architect of St. Paul’s Cathedral in London. Christopher Wren had a personal link to the church, as his uncle was the Bishop of Ely.

Michael Eisner took over as CEO of the Walt Disney Company in 1984. Eisner has been attributed with turning Disney around, as the company was floundering really since 1966 when Walt Disney died. Eisner had a good run, but ran foul of Walt Disney’s nephew Roy Disney who led a boardroom revolt that resulted in Eisner’s resignation in 2005.

Brandi Chastain is professional soccer player and former member of the US national team. Famously, Chastain scored the game-winning kick in a penalty shootout in the 1999 Women’s World Cup final. Male soccer players regularly whip off their jerseys in celebration of a goal, and Chastain did the same thing. The sports bra seen around the world, as it were …

57. Teaser that may include pluses and minuses : REBUS

“Ist” is the German word for “is”, in the third person singular.