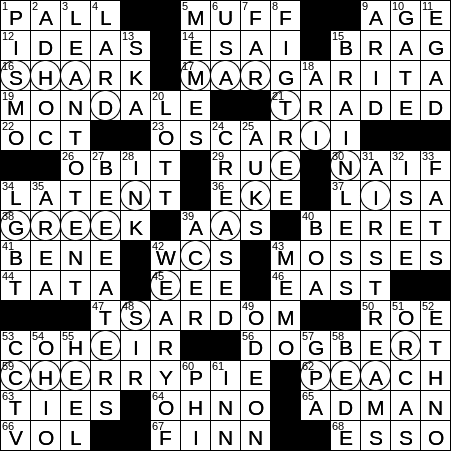 Themed answers come in pairs that share the first few letters, and then fork away from each other in the grid:

“The Brink” is a TV comedy that ran for just one season, starting in 2015. The show stars Tim Robbins and Jack Black, and centers on a geopolitical crisis in Pakistan.

The shad is also known as the river herring. The eggs (roe) of the female shad are prized as a delicacy in the Eastern US.

Walter Mondale served as US Vice president under President Jimmy Carter. Mondale was also the Democratic candidate defeated by President Ronald Reagan in 1984, losing in the biggest landslide in the country’s history. Mondale only won electoral votes in his home state of Minnesota and in the District of Columbia.

37. Leslie in the Women’s Basketball Hall of Fame : LISA

Lisa Leslie is a former professional basketball player who played in the WNBA with the Los Angeles Sparks. Leslie is rather tall, and was the first player to dunk the ball in a WNBA game.

The East Village is a neighborhood of Manhattan lying between Broadway and the East River, extending from 14th Street in the northeast to Houston Street in the southwest. The area was known simply as the northern part of the Lower East Side until the 1960s, when the moniker “East Village” was applied in an effort to distinguish it from the Lower East Side and its less desirable reputation. The name chosen leveraged the established image of the neighboring Greenwich Village as Manhattan’s Bohemian capital.

Dogbert is a character in the Scott Adams comic strip “Dilbert”. Dogbert celebrates his birthday on June 8, which also happens to be the birthday of Scott Adams himself. Dilbert bumps up against a character called Catbert quite a lot. Catbert is the “evil director of human resources” at Dilbert’s place of work.

Jon Hamm lived the life of a struggling actor for quite some time before he hit gold with the starring role in the AMC drama “Mad Men”. He plays the main character, advertising executive (and man about town), Don Draper.

67. Fictional boy who rafted down the Mississippi : FINN

In Mark Twain’s novel “Huckleberry Finn”, much of the storyline is taken up with Huck’s adventures with the slave Jim as they raft down the Mississippi River. By making the journey, the pair hope to find freedom from slavery for Jim and freedom from his vagrant drunkard father for Huck.

“Petrol” is the chiefly British-English term used for gasoline. “Petrol” comes via French from the Latin “petroleum”, itself derived from “petra” meaning “rock” and “oleum” meaning “oil”.

8. What Buddha is said to have meditated under : FIG TREE

Remember the catchphrase made famous by the cartoon character Snagglepuss, “Heavens to Murgatroyd!”? Snagglepuss stole that line from a 1944 movie called, “Meet the People” in which it was first uttered by none other than Bert Lahr, the actor who played the cowardly lion in “The Wizard of Oz”.

Ronnie Lott is a former NFL footballer who played most of his professional career with the San Francisco 49ers. After Lott retired, he co-founded the investment firm HRJ Capital with Harris Barton and Joe Montana (the H and J in “HRJ”). HRJ was in business for nine years but collapsed in 2009.

Bee-eaters are small colorful birds that feed on flying insects, mainly bees and wasps. The bee-eater catches its prey in its bill and then hits and rubs the bee or wasp on a hard surface until the stinger is dislodged, then it partakes of its meal.

The black ink known as “India ink” was actually developed in the China. The carbon pigment used to give the dark color was imported from India, hence the name.

40. Fashion accessory that may be six feet long : BOA

58. Monk known as “The Father of English History” : BEDE