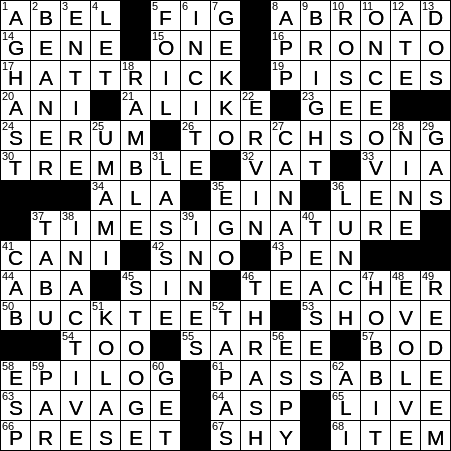 Happy New Year, everybody!. Themed answers each start with something that is PASSABLE, can be PASSED:

The story of Cain and Abel not only appears in the Christian and Hebrew Bibles, it also features in the Qur’an. In the Muslim account the brothers are named Qabil and Habil.

The Fig Newton cookie is based on what is actually a very old recipe that dates back to Ancient Egypt. Whereas we grew up with “Fig Rolls” in Ireland, here in America the brand name “Fig Newton” was used, as the cookies were originally produced in Newton, Massachusetts.

The astrological sign of the zodiac called Pisces is named for the Pisces constellation. “Pisces” is the Latin word for “fish”, in the plural (singular “piscis”).

A sentimental love song can be referred to as a “torch song”. The term derives from the expression “to carry a torch for someone” meaning to keep aflame the light of love, despite the feeling not being returned by the other party.

A dish prepared “a la king” (usually chicken or turkey), is food prepared in a cream sauce, with mushrooms, pimentos, green peppers and sherry.

Munich is the capital of the German state of Bavaria, and is the third largest city in the country (after Berlin and Hamburg). The city is called “München” in German, a term that derives from the Old German word for “by the monks’ place”, which is a reference to the monks of the Benedictine order who founded the city in 1158.

44. League that used a red, white and blue ball, for short : ABA

To be shy is to be short, lacking. This use of “shy” originated as gambling slang meaning “owe money to the pot”.

“Bouffant” is a French word meaning “puffed out” that we’ve imported into English. Apparently, the first use of “bouffant” with reference to a hairstyle dates back to 1955.

A canapé is a finger food, something small enough to eat in just one bite. In French, “canapé” is actually the word for a couch or a sofa. The name was given to the snack as the original canapés were savories served on toasted or stale bread that supposedly resembled a tiny couch.

28. Number of batters in a lineup : NINE

The canine character Lassie is the creation of Eric Knight, an author who wrote a short story that he expanded into a novel called “Lassie Come Home” published in 1940. “Lassie Come Home” was turned into a movie three years later, the first of a very successful franchise. The original Lassie (a female) was played by a dog called Pal, a male dog. In fact, all of the dogs that played Lassie over the years were males, because they looked better on camera, retaining a thick coat even during the summer months.

Hammond Innes was an English author who mainly wrote thrillers, of which several have been made into films. The most famous of his novels is probably “The Wreck of the Mary Deare”, which was first published in 1956. It was made into a successful movie of the same name in 1959 starring Gary Cooper and Charlton Heston.

In the game of golf, a “tee” is the wooden or plastic peg on which one can place a ball when “teeing off”. Also, the “teeing ground” (sometimes “tee” or “tee box”) is the area at the beginning of the hole from which the first stroke is taken, from where one tees off.

Ali Velshi is a television journalist from Canada who joined MSNBC in 2016, after having worked with CNN and Al Jazeera America.