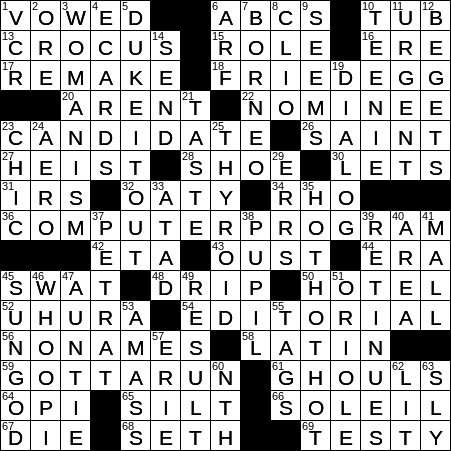 Themed answers are things that RUN:

The Academy of Motion Picture Arts and Sciences (AMPAS) is the organization that gives the annual Academy Awards also known as the “Oscars”. The root of the name “Oscar” is hotly debated, but what is agreed is that the award was officially named “Oscar” in 1939. The first Academy Awards were presented at a brunch in 1929 with an audience of just 29 people. The Awards ceremony is a slightly bigger event these days …

The Nike slogan “Just Do It” was created in an advertising meeting in 1988. Apparently the phrase was inspired by the last words of famed criminal Gary Gilmore. Gilmore faced execution by the state of Utah in 1977 and when asked if he had any last words he simply replied, “Let’s do it”. A few minutes later, Gilmore was executed by a firing squad.

Houseflies are very difficult to swat away. That’s because they can process visual information about seven times more quickly than humans. In effect, houseflies see movement in slow motion.

52. Enterprise officer with an earpiece : UHURA

Our word “ghoul” comes from the Arabic “ghul”, the name for an evil spirit that feeds on corpses.

67. Bit of board game equipment : DIE

Seth Rogen is a Canadian comedian who got a lot of credit for his supporting role in “The 40-Year-Old Virgin”. That led to him being cast as the lead in the 1970 film “Knocked Up”. Rogen also co-directed and and co-starred in the movie “The Interview”, which created a huge ruckus in North Korea.

2. Asset in the game The Settlers of Catan : ORE

Alice Walker is an author and poet. Walker’s best known work is the novel “The Color Purple”, which earned her the National Book Award and the Pulitzer Prize. “The Color Purple” was adapted into a very successful film of the same name, directed by Steven Spielberg.

5. Get into a fistfight : DUKE IT OUT

A retinue is a body of aides who attend an important person. The term comes from the Old French “retenue” that had the same meaning, although the literal translation is “that which is retained”. The idea is that the aides are retained to attend the VIP.