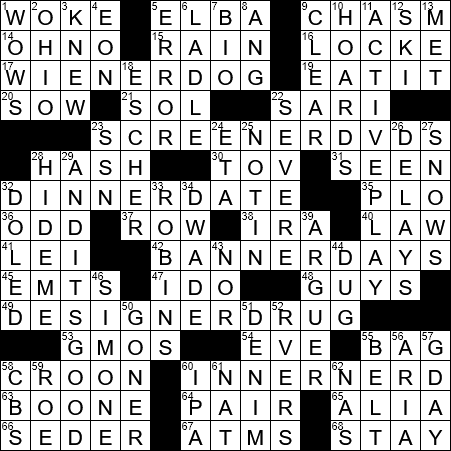 Themed answers each include the hidden word “NERD”, i.e. an INNER NERD:

The English actor Idris Elba is probably best known in North America for playing the drug lord Stringer Bell in the marvelous HBO drama series “The Wire”, and the title character in the 2013 film “Mandela: Long Walk to Freedom”. Off the screen, Elba occasionally appears as a disk jockey using the name “DJ Big Driis”.

Sol was the Roman god personifying the sun.

Yasser (also “Yasir”) Arafat was born in Cairo in 1929, the son of two Palestinians and the second-youngest of seven children. Arafat was beaten by his father as a child and so did not have a good relationship with him. Arafat did not attend his father’s funeral, nor did he visit his grave. The beatings were apparently administered because the young Arafat was repeatedly attending religious services in the Jewish quarter of Cairo. Arafat’s explanation was that he wanted to “study the mentality” of the Jewish people.

As well as writing novels, Ira Levin was a dramatist and a songwriter. Levin’s first novel was “A Kiss Before Dying”, and his most famous work was “Rosemary’s Baby” which became a Hollywood hit. His best known play is “Deathtrap”, a production that is often seen in local theater (I’ve seen it a couple of times around here). “Deathtrap” was also was a successful movie, starring Michael Caine and Christopher Reeve. My favorite of Levin’s novels though are “The Boys from Brazil” and “The Stepford Wives”.

“Dean Martin” was the stage name of singer and actor Dino Crocetti. Martin was famous for his numerous hit songs such as “That’s Amore”, “Volare” and Everybody Loves Somebody”, as well as his film career with Jerry Lewis. Off screen, Martin was a member of the famous “Rat Pack” as he was a great friend of Frank Sinatra. Martin was always associated with Las Vegas and when he passed away in 1995 the lights on the strip were dimmed in his honor.

Daniel Boone was a pioneer and folk hero. For frontiersman Boone, the frontier was what we now call the state of Kentucky. He led the building of the Wilderness Road through the famous Cumberland Gap in the Appalachians, a route subsequently taken by hundreds of thousands of migrants into Kentucky. Boone fought in the Revolutionary War with distinction, and after the war returned to Kentucky and got himself into land speculation. He became mired in debt, forcing him to emigrate to Missouri to settle down on land that was at that time owned by the French. It was there that he spent the last decades of his life.

67. Conveniences at many cash-only businesses : ATMS

The city of Columbus, Ohio is a “purpose-built” state capital. The state legislature selected the location for Ohio’s new capital in 1812, choosing dense forestland with no significant settlement, largely due to its strategic location in the center of the state. The name was chosen in honor of the explorer Christopher Columbus.

24. When you’ll likely reach your destination, for short : ETA

A dead duck is something beyond redemption, a goner.

“Suspenders” is another one of those words that has morphed in crossing the Atlantic. Back in Ireland we hold up our pants (trousers) with “braces”. Suspenders hold up ladies stockings (i.e. our word for a garter belt). It can be confusing …

Rapper Nas used to go by an earlier stage name “Nasty Nas”, and before that by his real name “Nasir bin Olu Dara Jones”. Nas released his first album “Illmatic” in 1994, and inventively titled his fifth studio album “Stillmatic”, released in 2001. Not my cup of tea, I would say …