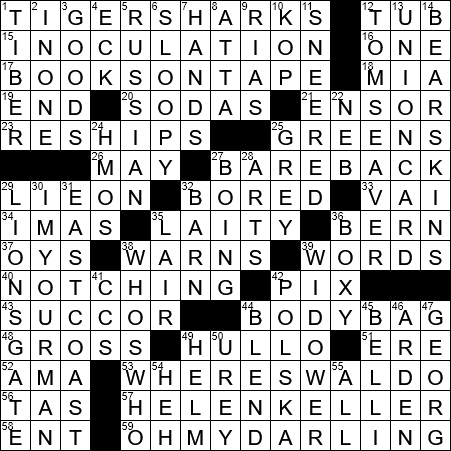 Constructor Pete Collins was kind enough to contact me about this puzzle. There is an “Easter egg” hidden in the answers in the grid’s perimeters. There’s a reference to a line spoken repeatedly by Dorothy, the Tin Man and the Scarecrow in the 1939 movie “The Wizard of Oz”, namely “”Lions and tigers and bears, oh my!”

James Ensor was a Belgian painter active in the first half of the twentieth century. He lived in Ostend for almost all of his life. In fact, he only made three brief trips abroad, to Paris, London and Holland.

Eruca sativa is an edible plant that is known as “arugula” in the US, and “rocket” in the British Isles and Canada. The Italian name for the plant is “rucola”, from the Latin name. It is “rucula” that evolved into the American term “arugula”.

26. When the French Open starts : MAY

“Misty” was written in 1954 by jazz pianist and composer Erroll Garner. Johnny Mathis had a hit with “Misty” five years later, and it was to become his signature tune. The song features prominently in the 1971 Clint Eastwood thriller “Play Misty for Me”, which I suppose isn’t so surprising given the title.

Before the 1880s, the most popular greeting in English was “hallo” or “hullo”. The use of “hello” became popular along with proliferation of telephones. When the telephone was invented, Alexander Graham Bell suggested that the greeting “Ahoy” be used when answering. Thomas Edison preferred “Hello”, which won out. By the end of the 1880s, telephone operators were being referred to as “hello-girls”.

Helen Keller became a noted author despite been deaf and blind, largely through the work of her teacher, Anne Sullivan. Keller was left deaf and blind after an illness (possible meningitis or scarlet fever). when she was about 18 months old. She was to become the first deaf and blind person to earn a Bachelor of Arts degree. The relationship between Sullivan and Keller is immortalized in the play and film called “The Miracle Worker”.

59. Repeated phrase in the chorus of a classic folk ballad : OH MY DARLING

“Oh My Darling, Clementine” is a folk ballad that dates back to the 1880s. The song is about a man who loses his lover, the daughter of a miner who took part in the 1849 California Gold Rush. The lyrics seem to be very sad, but are actually quite tongue-in-cheek.

1. River near the Pantheon : TIBER

The Tiber is the principal river in Italy in that it runs through the capital of Rome. It is also the third longest river in the country.

The Pantheon in Rome was built as a temple to all the gods of Ancient Rome. Even though the Pantheon was built almost two thousand years ago, the roof at its center remains the world’s largest unreinforced concrete dome.

During the Protestant Reformation in the 16th and 17th centuries, as Martin Luther was attacking the policies of the Catholic Church, Johann Eck was one of the leading defenders of Catholicism. The two had public debates, with Luther generally coming out ahead.

12. Hall-of-Fame pitcher who once struck out 10 consecutive batters : TOM SEAVER

Tom Seaver is a former baseball pitcher, noted for his ten-year stint with the New York Mets from 1967 to 1977. Seaver earned the nickname “Tom Terrific”, and in 1988 became the first Met player to have his jersey number retired. When he quit baseball he moved out here to California and opened up a small winery in Calistoga. Keep an eye out for the vineyard’s name, “Seaver Family Vineyards”, and their cabernets “Nancy’s Fancy” and “GTS”.

31. Locale of many a red-eye destination : EAST COAST

In Polish, “Warszawa” (Warsaw) is the capital of “Polska” (Poland).

Warsaw is the capital of Poland. The city’s name translates into English as “belonging to Warsz”. Legend has it that Warsz was a fisherman who fell in love with a mermaid called Sawa. It’s a nice story, but actually Warsz was a nobleman from the 12th or 13th century who owned a local village.

“Casus belli” is Latin for “a case of war”. The expression refers to an act that provokes or justifies a war. The related phrase “casus foederis” (a case for the alliance) refers to a threat against an ally that triggers a war.

“As You Like It” is one of Shakespeare’s comedies. It tells the tale of Rosalind fleeing from her Uncle’s court along with her cousin Celia and the court jester Touchstone. Rosalind lives in exile in the Forest of Arden, disguised as a male shepherd called Ganymede. The play is perhaps most memorable for an oft-quoted monologue that starts with:

All the world’s a stage,
And all the men and women merely players …

Baron Georg Johannes von Trapp was an officer in the Austro-Hungarian Navy who achieved worldwide fame when his family became the inspiration for the musical “The Sound of Musical”.

Harold Urey won the 1934 Nobel Prize in Chemistry for his discovery of the hydrogen isotope deuterium. Urey also speculated that the Earth’s early atmosphere might have consisted of ammonia, methane and hydrogen. One of Urey’s students conducted the Miller-Urey experiment, which showed that such a mixture of gases can produce amino acids if exposed to electric sparks and water. Amino acids are the building blocks of proteins, and are sometimes referred to as the building blocks of life.