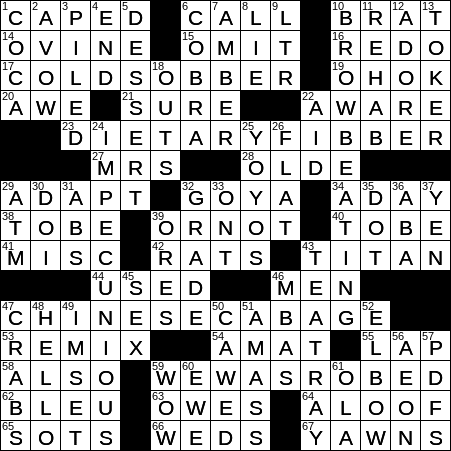 María Cayetana de Silva was the 13th Duchess of Alba. She was a favorite subject of the Spanish painter Francisco Goya. The duchess is the subject in the famous portraits known as “La maja desnuda” (The Nude Maja) and “La maja vestida” (The Clothed Maja). “Maja” translates from Spanish as “beautiful lady”.

Out terms “miscellany” and “miscellaneous” ultimately come from the Latin verb “miscere” meaning “to mix”.

The coca plant is native to South America and is similar in appearance to a blackthorn bush. Coca leaves have been chewed by humans for centuries, perhaps even as far back as 3,000 years ago. Chewing the leaves apparently produces a pleasurable numb sensation in the mouth and a pleasant taste. The most famous alkaloid in the leaf is cocaine, but this wasn’t extracted in its pure form until the mid-1800s. The extracted cocaine was used in a medicines and tonics and other beverages.

“Cobra” is the name given to a group of snakes, some of which are in different animal families. The term is reserved for those snakes that can expand their neck ribs to create a hood. The name “cobra” is an abbreviated form of “cobra de capello” which translates from Portuguese as “snake with hood”.

To be browbeaten is to be bullied, to be intimidated by someone exhibiting a stern manner. So, the “brow” of the bully “beats” down the victim by giving a stern look.

29 Producer of the Jacksons? : ATM

The twenty-dollar bill is called a “Jackson” as it bears the portrait of President Andrew Jackson on the front side of the bill. Jackson’s image replaced that of President Grover Cleveland in 1928, and there doesn’t seem to be any record documenting just why that change was made. Over one-fifth of all notes printed today are 20-dollar bills, and the average life of a Jackson is a little over 2 years, after which it is replaced due to wear.

46 Many corp. hirees have them : MBAS

57 Some email attachments, for short : PDFS

“Rock-Ola” was a jukebox brand name. Rock-Ola basically shared the market with Wurlitzer in the heyday of the jukebox. Rock-Ola is still making jukeboxes, and now caters to the “nostalgia market”, producing authentic looking players but using digital recordings and touch-screens for better sound and ease of use.