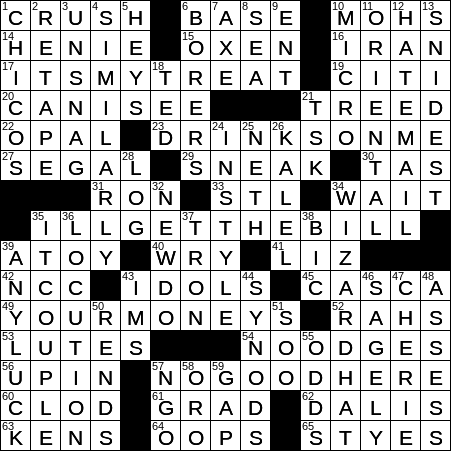 Today’s Theme (according to Bill): Welcome Comments at Bars

Themed answers are all comments that one might welcome at a bar:

Sonja Henie was a World and Olympic Champion figure skater from Norway from the days when “amateur” sports stars were not paid. Henie made up for her lack of income from competing by developing a career in Hollywood. She was one of highest-paid film stars at the height of her movie career.

The actor George Segal was one of my favorite Hollywood stars when I was growing up. I most remember him from the dramatic role he played in 1966’s “Who’s Afraid of Virginia Woolf?” alongside Richard Burton and Elizabeth Taylor, and the comedic role he played in 1973’s “A Touch of Class” opposite Glenda Jackson. Segal has made a successful transition to television in recent years, playing lead roles on the sitcoms “Just Shoot Me!” and “The Goldbergs”.

“The Goldbergs” is a very entertaining sitcom that started airing in 2013. The show was created by Adam F. Goldberg and is based on Goldberg’s own childhood and family. My favorite part of the show comes at the end of each episode, when a clip from Goldberg’s real home movies is shown, which clip relates back to that episode’s storyline.

31. Friend of Harry in the Harry Potter books : RON

Harry Potter, Ron Weasley and Hermione Granger are the principal characters in the “Harry Potter” series of fantasy novels by J. K. Rowling. The three are the best of friends.

33. The Cardinals, on scoreboards : STL

“Noodge” is a slang term meaning “to nag”, or as a noun meaning “a nag”. It comes into English from the Yiddish word “nudyen” meaning “to bore, be tedious”.

62. “The Burning Giraffe” and “The Persistence of Memory” : DALIS

Chico’s is a chain of retail stores selling women’s clothing that was founded in 1983. The founders were Marvin and Helene Gralnick, and they named their stores after a friend’s pet parrot, Chico.

“Den Haag” is the Dutch name for the city in the Netherlands that we know in English as “The Hague”. Even though The Hague is the seat of the Dutch parliament and is where Queen Beatrix resides, it is not the country’s capital city. That honor goes to Amsterdam.

Jor-El was a scientist on the planet Krypton who was married to Lara. Jor-El and Lara had an infant son named Kal-El who they were able to launch into space towards Earth just before Krypton was destroyed. Kal-El became Superman. In the 1978 movie “Superman”, Jor-El was played by Marlon Brando, Lara was played by Susannah York, and Kal-El/Superman was played by Christopher Reeve.

An it couple is generally a celebrity couple, and a glamorous one at that.