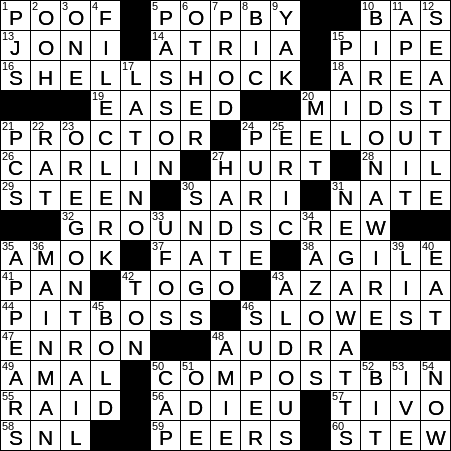 Constructed by: Amanda Chung and Karl Ni
Edited by: Will Shortz

Themed answers each start with an item that might be found in a COMPOST BIN:

26. Comedian who said “In America, anyone can become president. That’s the problem” : CARLIN

To “pan” a camera is to move in such a way as to create a “panoramic” effect, to sweep from one side of a scene to another.

The pit is part of a casino that usually holds the tables for craps, blackjack and roulette, and perhaps some other games. The tables are arranged around the pit, with players on the outside and dealers on the inside. The area is supervised by a pit manager (often “pit boss”).

46. Larghissimo, among all musical tempos : SLOWEST

47. “The Smartest Guys in the Room” company : ENRON

Amal Alamuddin married celebrated Hollywood actor George Clooney in 2014. Alamuddin was born in Beirut, Lebanon and moved with her family to London when she was a toddler. She is a lawyer specializing in international law, with one of her more renowned clients being the founder of WikiLeaks, Julian Assange.

Goulash is a soup or stew that is seasoned with spices, especially paprika. It is a national dish of Hungary, and the term “goulash” comes from the Hungarian word “gulyás”, which actually translates as “herdsman”. The original goulash was a meat dish prepared by herdsman.

“Bird on a Wire” is a fun film released in 1990, starring Mel Gibson and Goldie Hawn. The movie title comes from the Leonard Cohen song “Bird on the Wire”.

I remember watching the ditsy Goldie Hawn character on “Rowan & Martin’s Laugh-In”. Hawn used to give great performances on the show, convincing everyone that she was the stereotypical dumb blonde. Well, what a great career she was to carve out for herself!

12. Where Boeing was founded : SEATTLE

The Boeing Company was founded in Seattle in 1916 by aviation pioneer William Boeing, with the enterprise’s first name being “Pacific Aero Products Co.” Boeing had worked in the timber industry and set up his aircraft company in the Pacific Northwest to take advantage of the local supply of spruce wood.

Marco Rubio became the junior US Senator for Florida in 2011. Famously, Rubio ran for the Republican nomination for president in the 2016 race, losing out to future president Donald Trump.

US Senator Ted Cruz served as Solicitor General for the state of Texas before heading to Washington. Cruz was appointed Solicitor General in 2003 at the age of 32, making him the youngest Solicitor General in the country. Famously, Cruz is an opponent of the Affordable Care Act and made a speech in 2013 in the US Senate on the subject that lasted for 21 hours and 19 minutes. It was the fourth longest speech in the history of the Senate.

The Metropolitan Museum of Art (“the Met”) was founded in 1870 by a group of private citizens. The current museum is huge, with 2 million square feet of floor space.

34. Bathroom items that might be confiscated by the T.S.A. : RAZORS

Aldous Huxley was a writer from England whose best-known work is the novel “Brave New World”. Huxley was noted for his interest in parapsychology and mysticism, as well as for his promotion of the idea of taking psychedelic drugs “in a search for enlightenment”. Famously, Huxley died on November 22nd, 1963, the same day that President John F. Kennedy was assassinated.

“I’ve Got You Under My Skin” is a 1936 Cole Porter song that first appeared in the musical film “Born to Dance”. The song went on to become a big hit for the Four Seasons, and then a signature song for Frank Sinatra.