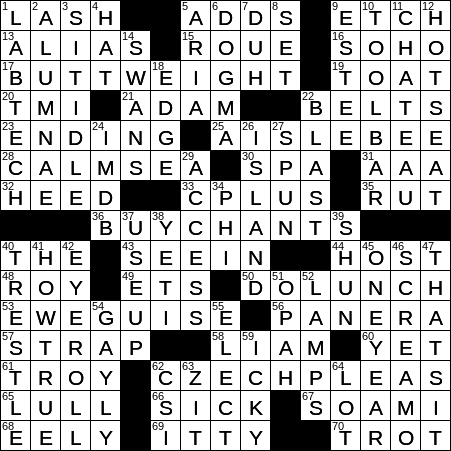 Today’s Theme (according to Bill): Clue This, Clue That

Each themed answer sounds like a common phrase, a phrase that could start that clue. The actual answer is pointed to by the whole clue. Funny, clever stuff!

I’m guessing that the notorious Wild West outlaw Billy the Kid was of Irish stock as his family name was McCarty. Another indication of an Irish connection is that he also used the aliases William Antrim, Henry Antrim and Kid Antrim, as Antrim is one of the six counties in the north of Ireland.

Adam Levine is the lead vocalist of the pop rock band Maroon 5. Levine is also one of the coaches on the reality show “The Voice”.

In James Cameron’s epic “Avatar”, the “blue people” are the Na’vi, the indigenous species that lives on the lush moon called Pandora. The main Na’vi character featuring in the film is the female Neytiri. According to Cameron, Neytiri was inspired by the Raquel Welch character in the movie “Fantastic Voyage” and the comic book character Vampirella.

Irish actor Liam Neeson got his big break when he played Oskar Schindler in the Spielberg epic, “Schindler’s List”. Neeson was in the news a few years ago when he lost his wife, actress Natasha Richardson, in a tragic skiing accident in 2009.

According to Greek mythology, Helen (later “Helen of Troy”) was the daughter of Zeus and Leda. When Helen reached the age of marriage, she had many suitors as she was considered the most beautiful woman in the world. Menelaus was chosen as her husband, and he took her back to his home of Sparta. Paris, a Trojan prince, seduced Helen, as she eloped with him and travelled to Troy. This event sparked the Trojan War that waged between the city of Troy and Greece. Because of this war, Helen was said to have “the face that launched a thousand ships”. And because of this phrase, it has been suggested, probably by author Isaac Asimov, that the amount of beauty needed launch a single ship is one “millihelen”.

The yeti, also known as “the abominable snowman”, is a beast of legend. “Yeti” is a Tibetan term, and the beast is fabled to live in the Himalayan regions of Nepal and Tibet. Our equivalent legend in North America is that of Bigfoot, also known as Sasquatch. The study of animals whose existence have not yet been substantiated is called cryptozoology, and a cryptid is a creature or plant that isn’t recognized by the scientific community, but the existence of which has been suggested.

The practice of ostracism, freezing out or exclusion, dates back to Ancient Greece. Back then citizens could write the names of men they thought were exceptionally dangerous on tiles that were publicly posted, resulting in a banishment of ten years. “Ostracize” derives from the Greek “ostrakon”, the word for a “tile”.