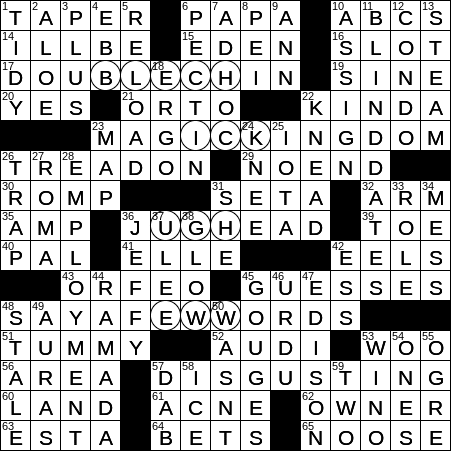 Constructed by: Craig Stowe
Edited by: Will Shortz

Themed answers include synonyms of “DISGUSTING” as hidden words:

36. Friend of Archie and Betty in the comics : JUGHEAD (hiding “ugh!”)

Jughead Jones is a character in Archie Comics, and someone who first appeared in print in 1941.

“Orfeo ed Euridice” is an opera by Christoph Willibald Gluck that was first performed in 1762. It is perhaps Gluck’s most popular work.

The parlor game called Twenty Questions originated in the US and really took off in the late forties as it became a weekly quiz show on the radio. Am I the only one who thinks that there aren’t enough quiz shows on the radio these days? I have to resort to listening to the BBC game shows over the Internet …

51. Where the belly button is : TUMMY

Pectin is a starch-like material found in the cell walls of plants. Pectin can be extracted from plants (usually citrus fruit) and then used in cooking as a gelling agent.

Marmalade is my favorite fruit preserve. The essential ingredients in a marmalade are fruit juice and peel, and sugar and water. “Marmalade” comes from the Portuguese “marmelada” meaning “quince jam”.

I. M. Pei (full name: Ieoh Ming Pei) is an exceptional American architect who was born in China. Of Pei’s many wonderful works, my favorite is the renovation of the Louvre in Paris, and especially the Glass Pyramid in the museum’s courtyard.

Ann Miller was a dancer and actress who appeared in several successful Hollywood musicals in the forties and fifties. The most famous of these were “Easter Parade” (1948), “On the Town” (1949) and “Kiss Me Kate” (1953).

Actress Ann Blyth is best known for her supporting role as Veda Pierce in the 1945 film “Mildred Pierce”.

“Mussel” is a common name for several types of clam and other bivalve molluscs, both saltwater and freshwater.

“The Family Circus” comic strip is a written by Bil Keane. Once Bil sketches out the text and idea for the cartoon he sends it off to his son Jeff, who inks and colors it so that it is ready for publication. In the storyline itself, the main characters are based on Bil’s own family. In fact, the character “Jeffy” is based on Jeff, Bil’s son and production assistant.

Incandescent bulbs are still quite common in many homes, despite the fact that they convert less than 5% of the energy used into light. Incandescents have an electric filament that glows as current passes through it. The life of the filament is preserved as the bulb is filled an inert gas such as argon, which displaces harmful oxygen in air.