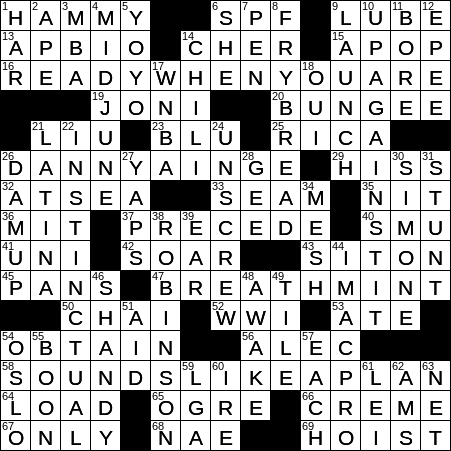 The hamstrings are four tendons connected to three posterior thigh muscles, although the term “hamstring” is sometimes used for the thigh muscles themselves.

“Cher” is the stage name used by singer and actress Cherilyn Sarkisian. Formerly one half of husband-wife duo Sonny & Cher, she is often referred to as the Goddess of Pop. In her acting career, Cher was nominated for the Best Supporting Actress Oscar of 1984 for her performance in “Silkwood”. She went further in 1988 and won the Best Actress Oscar for playing Loretta Castorini in “Moonstruck”.

20. Kind of cord for a daredevil : BUNGEE

The first Bungee jump using the modern latex cord was from the Clifton Suspension Bridge in Bristol, England. It was an illegal jump, with all five jumpers getting arrested soon after “hitting” the ground.

35. Something a pedant picks : NIT

47. Something to take after a garlicky meal : BREATH MINT

4. When the abolition of slavery is commemorated : MID-JUNE

“Juneteenth” is a holiday celebrated on June 19th every year, a commemoration of the emancipation of slaves throughout the Confederate South. President Abraham Lincoln’s executive order known as the Emancipation Proclamation came into effect on January 1st, 1863 but it only applied to Confederate State that were not in Union hands. The order freeing the last slaves in the US was issued at the end of the Civil War, on June 19th 1865. That order applied specifically to the State of Texas. Over a decade later, in 1980, Texas became the first state to declare June 19th (“Juneteenth”) a state holiday.

The sword known as an épée has a three-sided blade. The épée is similar to a foil and sabre, although the foil and saber have rectangular cross-sections.

17. Org. for the Indiana Fever and the Atlanta Dream : WNBA

Singer Smokey Robinson started his musical career in 1955 when he formed a singing group called the Five Chimes in his native Detroit. The group’s name changed to the Matadors in 1957, and eventually to the Miracles. In 1959, Robinson married Claudette Rogers, who was in the Miracles lineup at the time.