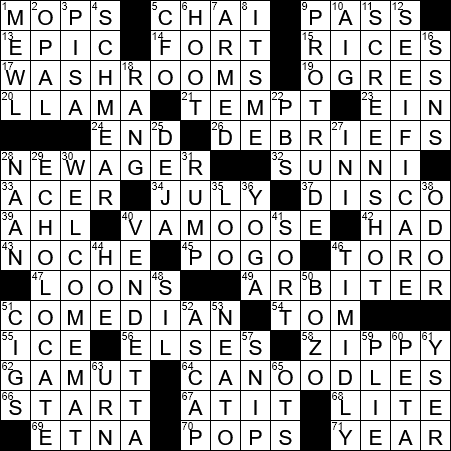 Today’s Theme (according to Bill): Briefly State Something

Themed answers are common words that have been rewritten as new words preceded by a US state’s abbreviation:

Washington has been nicknamed “the Evergreen State” since 1890, when the moniker was proposed by journalist turned real estate tycoon Charles Tallmadge Conover. The nickname has never been adopted officially, although it does appear on Washington state license plates. The name is a reference to the abundance of evergreen trees in the state’s forests.

The poet Ogden Nash is well known for his light and humorous verse. Try this one for size:

The state of Nebraska got its “Cornhusker State” nickname from the University of Nebraska athletic teams (and not the other way round). In turn, the university teams’ name comes from the prevalence of corn as a crop, and the harvesting process known as “cornhusking”, removal of the outer husk from the ear of corn.

Village People is a disco group formed in New York City in 1977. From day one, the band’s act and music was aimed at the gay community. The name refers to New York’s Greenwich Village, which at the time had a large gay population. The group’s members dressed up as characters associated with stereotypical gay culture, including a cop, Native American, GI, construction worker and cowboy. The biggest hits for Village People are “Y.M.C.A.” and “In the Navy”.

“The Old Dominion” is a nickname given to Virginia by King Charles II in recognition of the loyalty shown by the colony during the English Civil War.

“Noche y dia” translates from Spanish as “night and day”.

Toro is a manufacturer of mainly lawn mowers and snow removal equipment based in Bloomington, Minnesota. The company was founded in 1914 to build tractor engines.

Arkansas has had three official nicknames over the years:

The Territory of Colorado became a US state in 1876, just 28 days after the nation’s centennial celebration. As a result, Colorado is nicknamed “the Centennial State”.

In medieval times, the musical scale was denoted by the notes “ut, re, mi, fa, sol, la”. The term “gamma ut”, shortened to “gamut”, was used to describe the whole scale. By the 1620s, “gamut” was being used to mean the entire range of anything, the whole gamut.

The term “copyright” really derives from the concept of giving another party the “right to copy”. Usually “copyright” gives the holder the power to financially benefit from any copies made. Copyright was invented in essence soon after the development of the printing press, with the first legal statutes put in place in Britain in the early 18th century.

The “Mister Rogers’ Neighborhood” TV show starred Fred Rogers. It was the second-longest running series on PBS television after that other iconic children’s show “Sesame Street”.

Echolocation when used by animals is known as biosonar. The best-known example of an animal using biosonar is probably the bat, although not all species of bat use sounds to locate objects.

“Vendetta” is the Italian word for “blood feud”, and is especially associated with the island of Corsica.

A bozo is a person with a low IQ, and someone who is usually quite muscular. We’ve been using the term since the early 1900s and it possibly comes from the Spanish “bozal” that was used to describe someone who spoke Spanish poorly.

The Yser river flows into the North Sea at Nieuwpoort in the Flemish province of West Flanders in Belgium.