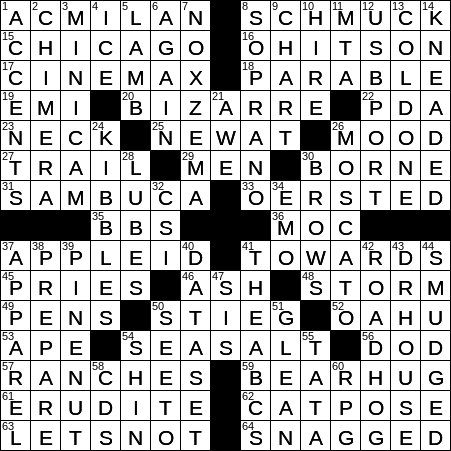 A parable is story told to illustrate a lesson or principle. It is similar to a fable, differing in that a fable uses mainly animals as characters, and a parable uses humans.

“The Good Samaritan” is a parable told by Jesus that can be read in the Gospel of Luke. According to the story, a Jewish traveler is robbed and beaten and left for dead at the side of the road. A priest happens by and sees the poor man, but does not stop to help. A fellow Jewish traveler also passes and refuses to help. A third man stops and gives aid. This kind person is a Samaritan, a native of Samaria. Back then Jewish and Samarian people were said to generally despise each other, and yet here a detested creature gives aid. Jesus told to the story to a self-righteous lawyer, the intent being (I assume) to shake up his self-righteousness.

19. Company that once owned Capitol and Virgin Records : EMI

“Bizarre” is a French word, with the same meaning in French as English. However, back in the 16th century, “bizarre” used to mean “handsome, brave” in French. So that’s what my wife means when she refers to me as “bizarre” …

Stieg Larsson was a Swedish journalist and writer. Indeed, one of the main characters in his “Millennium” series of novels is a journalist as well. The first two titles in the series are “The Girl with the Dragon Tattoo” and “The Girl Who Played with Fire”. The last of the three titles in the Millennium series is “The Girl Who Kicked the Hornet’s Nest”, which was the most-sold book in the US in 2010. All of the books in the series were published after Larsson’s death. He passed away from a heart attack while climbing several flights of stairs, when he was just 50 years old.

The lobbyists have done their job when it comes to the labelling of “sea salt”. In the US, sea salt doesn’t even have to come from the sea. The argument is that all salt came from the sea if you look back far enough. The politics of food, don’t get me started …

In Greek mythology, a chimera was a fire-breathing monster with the body of a lioness, a tail that ended in a snake’s head, and the head of a goat that emanated from the lioness’s spine. The term chimera has entered into our modern language and means a fanciful illusion or fabrication.

US Immigration and Customs Enforcement (ICE) is a federal agency that was founded within the Department of Homeland Security (DHS) in 2003. ICE was effectively formed from a merger of sections of the US Customs Service and the Immigration and Naturalization Service.

Kibbles ‘n Bits is a dog food first produced by Del Monte Foods that was introduced in 1981. The original selling feature of the product was that it contained both chewy and hard crunchy pieces.

Asti is in the Piedmont region of northwestern Italy. It is perhaps most famous for its Asti Spumante sparkling white wine. Moscato d’Asti is produced from the same grape (Moscato Bianco) but is a much sweeter wine with a lower alcohol content. It is usually served as a dessert wine.

32. Most-watched TV drama in the world for a record six years : CSI

41. Things to learn in kindergarten : THE ABCS

I think that “House” is one of the better shows made by Fox television. It is fun for me to see English actor Hugh Laurie in the title role as coming from the other side of the Atlantic I have been watching him in various comedic roles for decades. Famously he played Bertie Wooster opposite Stephen Fry in P.G. Wodehouse’s “Jeeves & Wooster”, as well as one of the bumbling “bad guys” in “101 Dalmatians” (the version starring Glenn Close).

“Curmudgeon” is a favorite term used by my wife to describe me. A curmudgeon is a bad-tempered person full of resentment and stubborn notions. I am sure she uses it very affectionately …