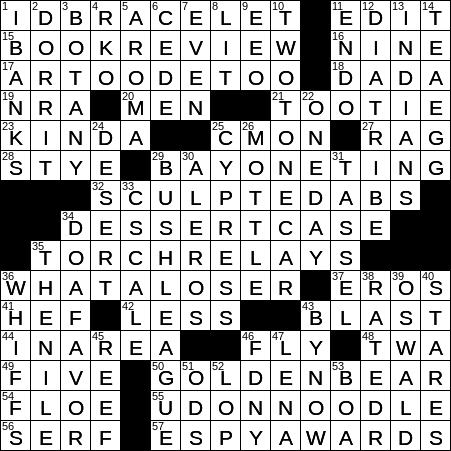 19. Its PAC is the Political Victory Fund : NRA

21. Gossipy schoolmate on “The Facts of Life” : TOOTIE

The actress Kim Fields is best known for playing Tootie Ramsey in the sitcom “The Facts of Life”, and Regine Hunter on “Living Single”.

A bayonet is a blade that is attached to the muzzle end of a rifle. It’s thought that the term “bayonet” derives from the French city of Bayonne in Gascony, where perhaps bayonets were first made.

35. Some preparations for the Olympics : TORCH RELAYS

London’s Piccadilly Circus is a major road junction in the West End of London. The junction is at one end of the thoroughfare called Piccadilly, hence the first part of the name. The junction’s shape is roughly circular, hence the use of “circus”, a Latin word meaning “circle”. Famously, there is a statue of Eros at the center of the junction.

In the game of pool, the 5-ball is a solid orange.

One side (player) in a game of pool uses the “solid” balls, the other the “stripes”.

“Little Dorrit” is a novel by Charles Dickens. It is a satirical work that takes potshots at the government and society of the day.

William Fox founded the Fox Film Corporation in 1915 to produce motion pictures. Fox lost control of his company soon after the Wall Street Crash of 1929. The new owners of Fox merged the company with Twentieth Century Pictures in 1935, forming 20th Century Fox.

A diatribe is a bitter discourse. The term comes from the Greek “diatribein” meaning “to wear away”.

“Polemic” can also be spelled “polemical”. Either way, the term describes something controversial. The word came into English from the Greek “polemos” meaning “war”.

The Cleveland baseball franchise started out in 1869 as the Forest Citys named after Forest City, the nickname for Cleveland. After a number of transitions, in 1914 the team took on the name “Indians”. The media came up with name “Indians” after being asked for suggestions by the team owners. “Indians” was inspired by the successful Boston team of the day, the Boston Braves.

14. Chinese snack with marblelike patterns on the outside : TEA EGG

The Chinese dish known as a tea egg is made by boiling an egg in water, cracking the shell, and then reboiling the egg in tea or a spiced sauce. Often sold as a snack food, the tea egg is also called a “marble egg”, referring to the marbled appearance of the cracked shell after boiling in a colored liquid.

The land of Chile has a very distinctive shape. It is a narrow strip that runs up the west coast of South America. The average width of the country is only a little over 100 miles, and yet its length is about 2,700 miles. Chile is touted as the longest country in the world, although I am not so sure what that means exactly. I mean, Russia extends about 4,800 miles from east-to west, so maybe “longest” implies long in the north-south direction?

“The Starry Night” is a Van Gogh masterpiece depicting what the artist could see from the window of his room in a sanitarium near the village of Saint-Rémy-de-Provence. I am somewhat ashamed to note that one reason I know this painting so well is that I put together a 2,000-piece jigsaw puzzle depicting “The Starry Night” not that long ago …

Something described as motley is mottled, is marked with different-colored spots. The term probably comes from the Old English word “mot” meaning “speck”. We can use the term “motley” figuratively to mean “diverse, heterogeneous”.

35. Setting for an Agatha Christie mystery : THE NILE

Agatha Christie wrote a very successful crime novel called “Death on the Nile” that was first published in 1937. That novel had started off life as a play that was was never performed, one that Christie called “Moon on the Nile”. Christie then adapted the novel back into a play again calling it “Murder on the Nile”, which opened in London in 1946.

Oswald the Lucky Rabbit is a character created by Walt Disney in the 1920s, and the first animated character to appear in their own series. Oswald made his first appearance in 1927, whereas Mickey Mouse first hit screens a year later. Oswald is now back in the limelight after showing up as a major character in a 2010 Disney video game called “Epic Mickey”.

English actress Lena Headey is best known for playing Cersei Lannister on the fantasy series “Game of Thrones”. Although a British citizen, Headey was actually born Bermuda, where her father was stationed as a police officer.