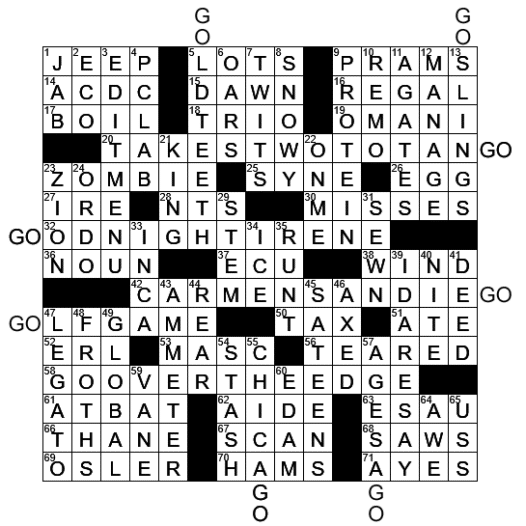 Constructed by: Morton J. Mendelson
Edited by: Will Shortz

Themed answers include the letters “GO” written outside the EDGE of the grid:

Chrysler’s Jeep Wrangler is a direct descendent of the military “Jeep” vehicle that was heavily relied on during WWII.

Another word used in the UK that’s rarely used over here is “pram”, which in my day was the most common term for what is called a baby carriage in the US. “Pram” is short for “perambulator”.

Snap, Crackle and Pop are three elves employed as the mascots for Kellogg’s Rice Krispies. The trio first appeared in an ad campaign in 1933, although the phrase “snap, crackle and pop” had been used for the cereal for some time in radio ads. By the way, the elves are selling “Rice Bubbles” in Australia, and the elves have different names in other parts of the world (like “Cric!, Crac! and Croc! in Quebec).

19. Dweller on the Arabian Sea : OMANI

26. Starting point for a platypus : EGG

The platypus (plural “platypuses” or “platypi”) is one of only five mammalian species that we know of that lay eggs rather than give birth to live young. The platypus is a native of Eastern Australia, and it is a weird creature to say the least. It’s appearance is bizarre enough, with its bill that resembles that of a duck, but it is also poisonous. The platypus has a spur on it hind foot that can inject venom and cause severe pain in humans.

Windows XP, Windows Vista and Windows 7, 8 and 10; they’re all based on the Windows NT operating system. There is a common perception that Windows NT (WNT) takes its name from VMS, an earlier operating system developed by Digital Equipment Corporation. “WNT” is what’s called a “Caesar cypher” of “VMS”, as you just augment the letters of VMS alphabetically by one to arrive at WNT. Bill Gates disputes this derivation of the name, and in a 1998 interview stated that the NT originally stood for N-Ten and that the marketing folks at Microsoft revised history by changing it to “New Technology”.

32. Classic song with the lyric “I’ll see you in my dreams” : GOODNIGHT, IRENE

“Goodnight, Irene”, also known as “Irene, Goodnight”, is a lovely American folk song that was first recorded commercially back in 1932 by blues singer Lead Belly. The song made it to number one in the charts for the Weavers in 1950 and for Frank Sinatra in the same year.

“Ecuador” is the Spanish word for “equator”, which gives the country its name.

“Der Erlkönig” (“The Erl King”) is a poem by the German writer Johann Wolfgang von Goethe. The poem tells of the death of child attacked by the Erl King, a supernatural being. The Austrian composer Franz Schubert made a musical adaptation of Goethe’s poem using the same title.

63. Progenitor of the Edomites, in the Bible : ESAU

Edom was an ancient Iron Age kingdom located in the south of modern-day Jordan. The area is known for its red-colored sandstone, which gave the kingdom its name. According to the Bible, the Edomites were the descendants of Esau. “Edom” translates from Hebrew as “red”, and was the name given to Esau when he ate the “red pottage”.

Thanes were Scottish aristocrats. The most famous thanes have to be the Shakespearean characters Macbeth (the Thane of Glamis, later Thane of Cawdor, and still later King of Scotland) and MacDuff (the Thane of Fife). Other thanes in “Macbeth” are Ross, Lennox and Angus, as well as Menteith and Caithness.

Sir William Osler was a Canadian physician, and one of the principal founders of Johns Hopkins Hospital.

The Italian city of San Remo sits on the Mediterranean, right on the border with France. In Italian, the city is named “Sanremo”, just one word. That said, the spelling “San Remo” dates back to ancient times.

A male goose is called a gander, with the female simply being referred to as a “goose”. Young geese are called goslings.

The Latin phrase “novus ordo seclorum” means “new order of the ages”. These words appear on the reverse of the Great Seal of the United States, a device used to authenticate some US federal documents. “Novus ordo seclorum” also appears on the back of one-dollar bills. The phrase itself is lifted from one of the works of the ancient Roman poet Virgil.

47. Opposite of staccato : LEGATO

55. Second-longest-running Broadway musical ever (after “The Phantom of the Opera”) : CHICAGO

“Old Ironsides” was a nickname given to the USS Constitution even though she is actually a wooden-hulled ship. The Constitution was launched in 1797 and can still be seen at sea today. She is the oldest commissioned naval vessel in the world. You can visit Old Ironsides at the Boston Navy Yard, where I had the privilege of touring her in 2011. As an old sailor, I’d say she is the best-maintained ship I’ve ever been on, and paradoxically, she is also the oldest. Really, really beautiful …