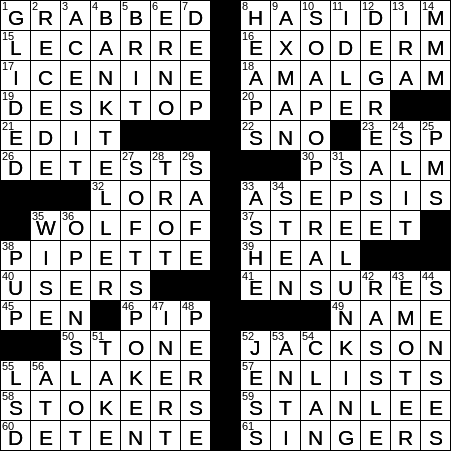 We have a WALL going down the center of today’s grid. Themed answers on either side of the WALL use the word WALL to make sense of the equivalent clues:

The Hasidic Jewish movement was founded in the 18th century by Baal Shem Tov, a mystical rabbi from Eastern Europe.

15. Author known for the intelligence of his writing? : LE CARRE

Manassas, Virginia was the site of two major battles during the Civil War: the First and Second Battles of Bull Run (also known as the Battles of Manassas). In the first battle, one of the southern brigades was led by Brigadier General Thomas Jackson. His brigade was well-trained and disciplined, so much so that as the Union troops made advances, a fellow-general encouraged his retreating men to hold their positions yelling “There is Jackson standing like a stone wall. Let us determine to die here, and we will conquer”. There are reports that the actual quote was less complimentary, but regardless, from that day on Jackson was known as “Stonewall”.

Kobe Bryant played basketball for the LA Lakers. Kobe Bryant got his name from a menu, would you believe? His parents were in a Japanese restaurant and liked the name of “Kobe” beef, the beef from around the city of Kobe on the island of Honshu in Japan.

“Chassé” is a step used in ballroom and other styles of dance. A chassé has a gliding character and is a triple-step movement. The term comes to popular dance from ballet.

4. One who may help you keep your balance? : BANK TELLER

Ernő László was a dermatologist from Hungary who became sought out by celebrities for treatment of both serious and cosmetic skin issues. He founded the Ernő László Institute in New York in 1939, which soon had an impressive list of clients that included the Duchess of Windsor, Greta Garbo, Grace Kelly, Ava Gardner, Katharine Hepburn, Audrey Hepburn, Marilyn Monroe and Jacqueline Kennedy Onassis.

12. Prepare, as hides for tanning : DEGREASE

Seba Smith was a humorist and writer from Maine whose most popular works featured his character Major Jack Downing, a man who used American vernacular in his humor. Smith is credited with coining the adjective “scrumptious” meaning very delectable, pleasing to the senses. “Scrumptious” is probably an alteration of “sumptuous”. Smith perhaps also coined the phrase “there is more than one way to skin a cat”, or was at least the first author to use the phrase in a publication.

Spelunking is an American term for recreational caving, although the word has Latin roots (“spelunca” is the Latin for “cave”). The term originated in the 1940s in New England when it was adopted by a group of men who explored caves in the area.

An atom’s valence is the number of electrons that it loses, adds or shares when bonding with other atoms.