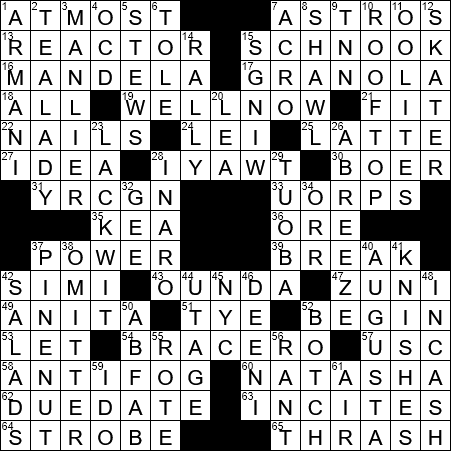 Constructed by: Herre Schouwerwou
Edited by: Will Shortz

This one is quite complicated. The big black square in the middle of the grid is a roundabout, with the answer IN A ROUNDABOUT WAY wrapped around it. Four answers run into the roundabout from the edges, get deflected, and then finish off at right-angles. Because I solved using an app, the numbering in my grid doesn’t match that of the printed puzzle. Apologies …

A nuclear reactor is a device designed to maintain a self-contained nuclear chain reaction. Nuclear fission generates heat in the reactor core. That heat is transferred out of the core by a nuclear reactor coolant, and is used to turn steam turbines. Those steam turbines usually drive electrical generators, or perhaps a ship’s propellers.

A schnook is a person who is easily cheated, someone who is extremely gullible. The term comes into English from Yiddish.

If you get the chance, take a look at the Matt Damon-Morgan Freeman movie called “Invictus” that is directed by Clint Eastwood. It’s all about rugby in South Africa after Nelson Mandela came to power. A powerful film …

“Boer” is the Dutch and Afrikaans word for “farmer”, a word that was used to describe the Dutch-speaking people who settled parts of South Africa during the 1700s.

Simi Valley, California is perhaps best known as home to the Ronald Reagan Presidential Library. The library is a great place to visit, and there you can tour one of the retired Air Force One planes.

54. Actress Lyonne of “Orange Is the New Black” : NATASHA

The Guggenheim art museum on Fifth Avenue in New York opened in 1939 as the Museum of Non-Objective Painting. The museum was funded by the Solomon R. Guggenheim Foundation that had been set up by the American businessman and philanthropist for whom the foundation was named. When Guggenheim died in 1952, the New York museum was renamed to the Solomon R. Guggenheim Museum. I’ve only visited the museum once in my life, and I love the building (designed by architect Frank Lloyd Wright). The works that I saw there … not so much …

4. Condition for some germophobes, briefly : OCD

Tole is metalware that has been lacquered or enameled, and usually painted or gilded. “Tôle” is the French word for “sheet metal”.

The variety show “Hee Haw” aired on CBS from 1969-1971, and then had a 20-year run in syndication. The show was built around country music, although the format was inspired by “Rowan & Martin’s Laugh In”.

Oolite is a sedimentary rock also called “egg stone”. Indeed, the term “oolite” comes from the Greek “ooion” meaning egg. The rocks are often round and white (hence the name) and are composed of calcium carbonate.

Figure skating started out as a sport in which a skater demonstrated skill at carving out specific patterns into the ice (a figure-8, for example). Over time, the sport placed greater influence on free skating. Compulsory figures were dropped completely from most international competitions in the 1990, but the name “figure skating” has been retained.

Bobby Orr is regarded as one of the greatest hockey players of all time. By the time he retired in 1978 he had undergone over a dozen knee surgeries. At 31 years of age, he concluded that he just couldn’t skate anymore. Reportedly, he was even having trouble walking. While still 31 years old, in 1979, Orr became the youngest person inducted into the Hockey Hall of Fame.

“Absolutely Fabulous” (sometimes shortened to “Ab Fab”) is a cult-classic sitcom produced by the BBC. The two stars of the show are Jennifer Saunders (Edina Monsoon) and Joanna Lumley (Patsy Stone). “Absolutely Fabulous: The Movie” hit the screens in 2016. I haven’t seen it yet, but my wife did and really enjoyed it. She said that there’s a veritable cavalcade of British stars that make an appearance …