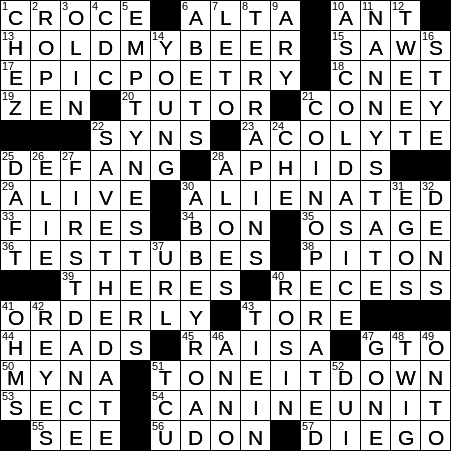 The words “warm” and “toasty” are synonyms (syns.).

“August: Osage County” is a dark comedy play by Tracy Letts that won a 2008 Pulitzer Prize for Drama. I saw the 2013 movie adaptation that has a great cast including Meryl Streep, Julia Roberts, Ewan McGregor, and Benedict Cumberbatch. I really enjoyed it …

“Shakers” is a the more common name for the religious sect more properly called the United Society of Believer in Christ’s Second Appearing. The sect’s doctrine was based on the teachings of Ann Lee.

54. Employer of some shepherds : CANINE UNIT

The lovely German shepherd breed of dog isn’t one of the older breeds, and only dates back to 1899. German shepherds are the second-most popular breed in the US, after the Labrador retriever.

57. Title character of a “Dora the Explorer” spinoff : DIEGO

6. Acts as a decoy for, possibly : ABETS

The sports teams of the University of Maryland are called the Maryland Terrapins, or “the Terps” for short. The name dates back to 1932 when it was coined by the the university’s president at the time, Curley Byrd. He took the name from the diamondback terrapins that are native to the Chesapeake Bay.

If you go looking for a laundromat in the UK or Ireland, folks will likely know what you’re talking about. However, the local name for such a facility is “launderette” or sometimes “laundrette”.

The Abbey Road Studios in London was a large Georgian townhouse built in the 1830s. It became a recording studio in 1931, and you can even see some YouTube video showing Sir Edward Elgar back then making recordings with the London symphony Orchestra. The studios passed through various owners and by the time the Beatles started their famous recording it was known as EMI Studios. The Beatles recorded practically all of their albums there, between 1962 and 1970. Famously they named a 1969 album after the studio, “Abbey Road”. That’s the one with the cover showing the Fab Four crossing the “zebra crossing” outside the studio.

Point Reyes is a picturesque cape on the Northern California coast about 30 miles west-northwest of San Francisco. The cape was named “Punto de los Reyes” (Kings’ Point) by Spanish explorer Sebastián Vizcaíno, when his ship anchored nearby on the Day of the Three Kings (January 6th) in 1603.

52. Determination from a Breathalyzer test, for short : DUI

What we know today as the breathalyzer was introduced in 1931 as a device called the “drunkometer”.