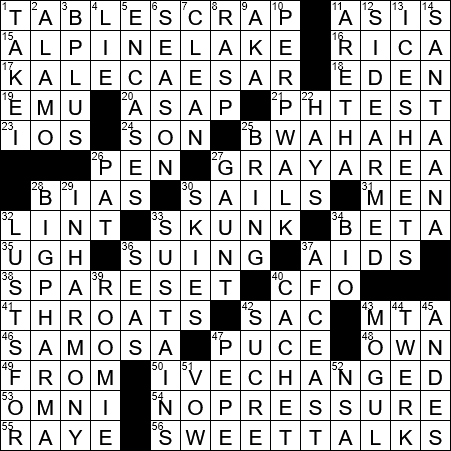 The Caesar salad was created by restaurateur Caesar Cardini at the Hotel Caesar’s in Tijuana, Mexico. The original recipe called for whole lettuce leaves that were to be lifted up by the stem and eaten with the fingers.

The dingo is a wild dog of Australia. It is thought to have originated from domesticated dogs that were brought to Australia with humans that settled the land centuries ago.

23. Platform that many things run on : IOS

“Lint”, meaning “fluff”, is one of those terms that I had to learn when I moved to the US. We call the same thing “fuzz” on the other side of the pond …

The name of the purple shade known as “puce” has a strange derivation. “Puce” came into English from French, in which language “puce” means “flea”. Supposedly, puce is the color of a flea!

National Car Rental was founded back in 1947, a conglomerate of 24 independent rental agencies that already existed around the country.

6. September and October, for pumpkins : SEASON

I think Aretha Franklin, the Queen of Soul, had a tough life. Franklin had her first son when she was just 13-years-old, and her second at 15. In 2008, “Rolling Stone” magazine ranked Franklin as number one in their list of the greatest singers of all time.

Fort Hays was a frontier post and US Army fort near Hays, Kansas. The facility was known as Fort Fletcher when it was established in 1865, named for Missouri governor Thomas C. Fletcher.

Irving Berlin’s real name was Israel Baline, a Russian immigrant who came to New York with his family in 1893. In the words of composer Jerome Kern, “Irving Berlin has no place in American Music – he is American music”. That would seem to ring true looking at a selection of his hits: “Alexander’s Ragtime Band”, “White Christmas”, “There’s No Business Like Show Business” and of course, “God Bless America”. Berlin was married twice. His first marriage was in 1912, to Dorothy Goetz. Sadly, Dorothy died just a few months later from typhoid fever that she contracted on their honeymoon in Havana. His second marriage was to a young heiress, Ellin Mackay. That marriage lasted a lot longer, until 1988 when Ellin passed away at the age of 85. Irving himself passed away in 1989, at the ripe old age of 101 years.

The Buffalo Bills, founded in 1959, were named after an earlier team with the same name that had merged with the Cleveland browns back in 1950. The Bills name was obviously popular with fans, as the name was chosen in public contest. The older team had been named for “Buffalo Bill” Cody. The team mascot is Billy Buffalo, and the cheerleaders are known as the Buffalo Jills.

“Cachet” is a French word that we use in English for an official seal, usually one applied to a document. We also use the term figuratively. When we say that something has “a certain cachet”, we are implying that it has a certain level of prestige, as if some authority has given it a seal of approval.

A mogul is a person with power. The term comes from the Mughal emperors of India and South Asia.

Twerking is a dancing move in which a woman (usually) shakes her hips up and down causing a lot of “wobbling”. It’s possible that “twerk” is a portmanteau of “twist” and “jerk”. The term may have been coined back in the early 2000s with the song “Whistle While You Twurk” released by the Ying Yang Twins. Twerking became a real phenomenon in 2013 when Miley Cyrus posted a video of herself twerking in a unicorn suit to the 2011 song “Wop” by J. Dash. That video went viral on YouTube, amassing over 4 million views in no time at all.

The Andes range is the longest continuous chain of mountains in the world, as it runs down the length of the west coast of South America for about 4,300 miles, from Venezuela in the north to Chile in the south. The highest peak in the Andes is Mt. Aconcagua, at an elevation of 22,841 feet. Interestingly, the peak of Mt. Chimborazo in Ecuador is the furthest point on the Earth’s surface from the center of the planet. That’s because of the equatorial “bulge” around the Earth’s “waist”.