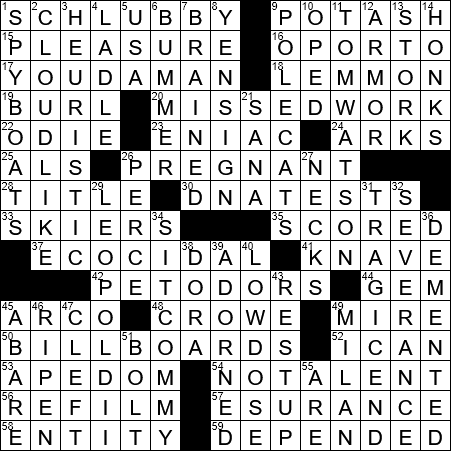 “Potash” is the common name for potassium carbonate, and is a name also applied to other minerals containing the element potassium. The term arises from the old process for producing the chemical which involved soaking wood ashes in water and evaporating the mixture in an iron pot. The resulting material were called “pot ashes”.

A sybarite is a person devoted to pleasure and luxury. The term “sybarite” is derived from Sybaris, an Ancient Greek city which was extremely wealthy. The city’s inhabitants, the Sybarites, were known for their love of the good life.

The marvelous actor Jack Lemmon was born in 1925 in a suburb of Boston, in a hospital elevator. The long list of Jack Lemmon movies on my list of favorites includes “Some Like It Hot”, “The Apartment”, “Irma La Douce”, “The Odd Couple” and “Grumpy Old Men”.

A burl is a small knot in a piece of wood or in cloth. The term “burl” is derived from the Old French “bourle” meaning “tuft of wool”.

The Torah ark is found in a synagogue, and is the ornamental container in which are stored the Torah scrolls. The word “Torah” best translates as “teaching”, I am told.

Much of the sitcom “Happy Days” was set in Arnold’s Drive-In. Arnold Takahashi was played by Pat Morita, who also played Mr Miyagi in the movie “The Karate Kid”. Morita left the show after three seasons, and was replaced by Al Molinaro as Al Delvecchio, the character who ran the diner as “Al’s” for the rest of series’ run.

26. Waiting for a delivery : PREGNANT

The playing card known as a jack is also known as a knave. “Knave” was the original term, the same term used for a male servant of a king and queen. The term “jack” came into usage in games played by “common folk”, and started to become entrenched in the mid-1980s.

The odor-eliminating product we know today as Febreze was developed in England in the early nineties, and is now produced by Product & Gamble.

A paragon is an model of excellence, a peerless example. Ultimately the term derives from the Greek “para-” meaning “on the side” and “akone” meaning “whetstone”. This derivation comes from the ancient practice of using a touchstone to test gold for its level of purity by drawing a line on the stone with the gold and comparing the resulting mark with samples of known purity.

Esurance is a provider of auto insurance direct to customers online and over the phone. Esurance is now owned by Allstate.

Something nebulous is indistinct and vague. The term “nebulous” comes from the Latin “nebula” meaning “mist, vapor”.

The title of widest circulation of any American newspaper is an honor competed for by “The Wall Street Journal”, “The New York Times” and “USA Today”, with each paper selling about 2 million copies each day (including online subscribers). “USA Today” was launched in 1982.

Tom Watson is a professional golfer from Kansas City, Missouri. Watson was the world number one from 1978 to 1982. In 2009, he got very close to winning the British Open Championship, losing in a 4-hole playoff. At the time, Watson was just a few months shy of 60 years age …

21. Capital across the Red Sea from Asmara : SANA

Sana (also “Sana’a”) is the capital city of Yemen. Sitting at an elevation of 7,380 feet, Sana is one of the highest capital cities in the world. Within the bounds of today’s metropolis is the old fortified city of Sana, where people have lived for over 2,500 years. The Old City is now a World Heritage Site. According to legend, Sana was founded by Shem, the son of Noah.

Asmara is the capital and largest city in Eritrea. The same city is known locally as “Asmera”.

The Nez Percé tribe of the Pacific Northwest call themselves the Nimiipuu, meaning “The Real People”. The name Nez Percé means “pierced nose” in French, a name applied in error to the Nimiipuu instead of the neighboring Chinook tribe, who did in fact practice nose piercing.

There have been three kings of Belgium named Leopold. Leopold I was the first king of the Belgians after the country gained independence from the Netherlands in 1831. He was an uncle of Queen Victoria of the UK. Leopold II is most associated with the harsh Belgian regime responsible for the deaths of millions of people in the Congo Free State in Africa. Leopold III reigned from 1934-1951. He was a controversial character during WWII and faced a charge of treason after the war from which he was exonerated. Leopold III succumbed to political pressure and abdicated in 1951.

Dunsinane Hill in Perthshire, Scotland gets a mention in William Shakespeare’s “Macbeth”.

Macbeth shall never vanquished be, until Great Birnam wood to high Dunsinane hill Shall come against him.

Aspirin used to be a brand name for the drug acetylsalicylic acid. Aspirin was introduced by the German drug company Bayer AG in the late 1800s. As part of the war reparations paid by Germany after WWI, Bayer AG lost the use of the trademark “Aspirin” (as well as the trademark Heroin!) and it became a generic term.