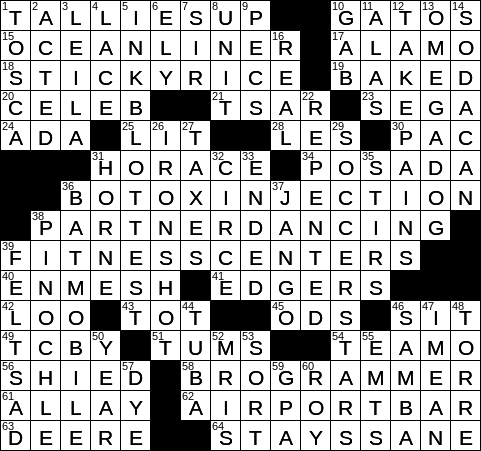 Back in the mid-1600s, a tally was a stick marked with notches that tracked how much one owed or had paid. The term came from the Latin “talea” meaning “stick, rod”. The act of “scoring” the stick with notches gave rise to our word “score” for the number in a tally.

Netflix was founded in Los Gatos, California in 1997 as a DVD rental company that sent out titles by mail. Netflix no longer focuses on distribution by mail, and instead provides programming on demand. The company is now making a big play in the production of films and TV programs.

The Carnival Cruise Line was founded in 1972, and now has over 20 vessels in operation. Three of those Carnival ships were chartered by the US government in the wake of Hurricane Katrina so that they could provided temporary housing for families displaced by the storm.

Sticky rice is actually a type of rice, and not a means of preparation. Sticky rice is more usually called “glutinous rice”, even though it does not contain dietary gluten.

Genesis is a video game console sold in the US by the Japanese company Sega. Genesis is sold as Mega Drive in the rest of the world, as Sega couldn’t get the rights to the Mega Drive name in the US.

“Les Sylphides” is a 1909 ballet choreographed by Michel Fokine with music by Frédéric Chopin. The ballet is described as non-narrative, meaning that it has no story but simply showcases the dancing.

31. Roman who wrote “Whatever advice you give, be brief” : HORACE

“Posada” is Spanish for anything from a cafeteria to a pub or motel.

Ibiza is a Mediterranean island located almost 100 miles off the Spanish coast. It is a very popular tourist destination, largely for its legendary nightlife.

51. Brand name that spells something not nice backward : TUMS

The main ingredient in Tums antacid, made by GlaxoSmithKline, is calcium carbonate. Tums have been on the market since 1930. If you want to save a few pennies, Target brand antacid is identical to Tums, so I hear …

Lord Byron wrote the poem “Don Juan” based on the legend of Don Juan the libertine. For the poem, Byron created the character Leila, a 10-year-old Muslim orphan girl whom Juan rescues from the city of Ismail.

The Isle of Ely in England isn’t an island as we would usually know it, and instead is the name of the area surrounding the city of Ely. Centuries ago however, the region was in fact an island surrounded by a fen, a type of swamp. The name is said to derive from “Island of Eels”, a reference to the large number of eels caught in the area’s rivers.

“Bwana” is a Swahili word meaning “important person” or “leader of a safari”.

27. Annual spring chore, for many : TAXES

A header is a pass or shot at goal in soccer made by heading the ball, by hitting and directing the ball with the head.

Pinochle is a card game that was developed from the 19th-century French game called bezique.

46. Option for 38-Across : SAMBA
(38A. Activity involving a leader and a follower : PARTNER DANCING)

Buck Showalter serves as the manager of the New York Yankees, the Arizona Diamondbacks, the Texas Rangers and the Baltimore Orioles baseball teams. Showalter has won the American League’s Manager of the Year award three times.

Rob Roy was a folk hero in Scotland from the 18th century. He was a sort of Scottish Robin Hood, an outlaw who had the support of the populace. Rob Roy’s full name was Robert Roy MacGregor, itself an anglicization of the Scottish Raibeart Ruadh. He gave his name to a famous cocktail called a Rob Roy, a relative of the Manhattan that is made with Scotch instead of bourbon.