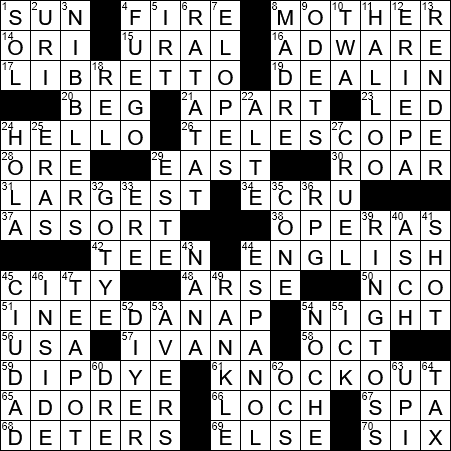 Constructed by: Queena Mewers & Alex Eaton-Salners
Edited by: Will Shortz

There’s a note with the electronic version of today’s puzzle:

In the newspaper version of this crossword, the clues appear in a single list, combining Across and Down. When two answers share a number, they also share a clue.

2. Sch. with a campus in Providence : URI

Pan American World Airways (usually just “Pan Am”) started out as a mail and passenger service between Key West, Florida and Havana, Cuba in 1927. From very early in the company’s life it was the de facto representative air carrier of the United States. For many years Pan Am’s fleet was built around the Boeing 314 Clipper, a long-range flying boat that was one of the largest aircraft around at the time. Pan Am adopted the Clipper as part of its image, even using “clipper” as the call sign for its flights.

Adware is “advertising-supported software”, an application that includes ads in some form so that the developed can generate revenue. Sometimes deceptive practices can be used to entice a user to install such programs, so adware can sometimes be classed as malware (malicious software).

17. Contribution of Gilbert, but not Sullivan : LIBRETTO

A libretto can be the book that contains the text of a dramatic musical work, with the text itself also being called the libretto.

26. Help for a star witness? : TELESCOPE

Ganymede is the largest of Jupiter’s sixty-seven moons, and is the largest moon in the Solar System. Ganymede was discovered in 1610 by Galileo. Astronomer Simon Marius gave the moon the name Ganymede, for Zeus’s lover in Greek mythology.

In J.M. Barrie’s play and novel about Peter Pan, Peter takes Wendy Darling and her two brothers on adventures on the island of Neverland. Back in the real world, the Darling children are taken care of by a nanny, a Newfoundland dog called Nana. It is Nana who takes Peter Pan’s shadow away from him as he tries to escape from the Darling house one night.

Back in Ireland, we don’t have “hardware stores” as such, but rather “DIY centres” (and that’s the spelling of “centres”). “DIY” is an initialism standing for “Do it yourself”.

Donald Trump Jr. is the oldest child of President Donald Trump and his first wife Ivana Trump née Zelníčková. Soon after his father was elected president, Donald Jr. was named trustee of the Trump Organization, along with his brother Eric and company CFO Allen Weisselberg.

Our word “fathom” comes from the Old English word used to describe the length of the outstretched arms. Today, a fathom is equal to six feet.