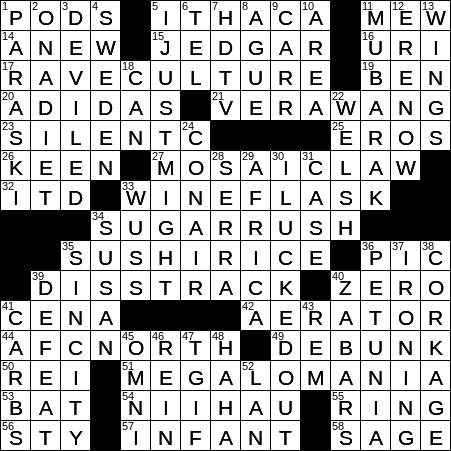 As you might imagine, I’ve never been to a rave, and don’t have one upcoming in my diary. And as raves often start at 2 a.m.,then I’m unlikely ever to experience one. A rave is generally an all-night party featuring loud, electronically-synthesized music usually played by a DJ as opposed to a live band.

Uncle Ben’s is a famous brand of rice that was introduced in 1943. It was the biggest selling brand of rice in the US from the fifties through the nineties. As one might imagine, the name “Uncle Ben” is pretty offensive and Mars, who owns the brand now, have tried to distance themselves from the African-American slave/domestic servant image. In 2007 there was a TV campaign showing “Uncle Ben” as Chairman of the Board of the company. But, he is still called Uncle Ben …

Vera Wang’s first choice for a career was figure skating. Although she a very capable skater, Wang failed to make the 1968 US Olympics team. She switched to the world of fashion, and is now famous for her designs of wedding dresses … and also costumes for figure skaters.

The fourth letter in the word “miscellaneous” is a silent letter C (cee).

34 What a whole lot of kisses might result in : SUGAR RUSH

35 Stuff in a roll at a Japanese restaurant : SUSHI RICE

39 Song that a hip-hop rivalry might inspire : DISS TRACK

The word “bunk” is short for “bunkum”, the phonetic spelling of “Buncombe”, which is a county in North Carolina. Supposedly, a state representative made a dull and irrelevant speech that was directed to his home county of Buncombe, bringing the term “bunkum” into the language with the meaning of “nonsense”. The derivative word “debunk” first appeared in a novel by William Woodward in 1923, when he used it to describe “taking the bunk out of things”.

The Hawaiian island of Niihau lies about 17 miles southwest of Kauai, and has a population of just over 100 people. Niihau is privately owned and so only a few tourists are welcome, and only in the past few decades. The lack of access led to the island earning the nickname “the Forbidden Isle”.

Paraskiing is skiing across snowy terrain while being pulled along by a parachute.

Deviled eggs are hard-boiled eggs that have been shelled and sliced in two. The egg’s yolk is mixed with primarily mayonnaise and mustard, and then spooned into the hard-boiled egg white. The eggs are then sprinkled with paprika and served cold. Some people make deviled eggs on Halloween, dropping an olive slice in the middle so that the whole thing resembles an eyeball! The term “deviled” has been used for zesty or spicy foods since the 1700s.

Hosni Mubarak was the fourth President of Egypt, taking over after Anwar Sadat was assassinated in 1981. Mubarak resigned in 2011 in the early months of the Arab Spring after 18 days of public demonstrations. He was sentenced to life imprisonment in 2012 and is reported to be extremely sick in detention, and is perhaps even on life support.

A lazy Susan is a circular tray at the center of a dining table that can be rotated by those partaking in the meal. The term “lazy Susan” was introduced in the early 1900s, first appearing in an article in the magazine “Good Housekeeping”. Before this designation, the device had been called a “dumbwaiter”, a term we now use for a small elevator used for transporting food from a kitchen to a dining room.

The flowering plants known as petunias are in a genus that related to the tobacco plant. The name “petunia” comes from the obsolete French word “petun” meaning “tobacco plant”.