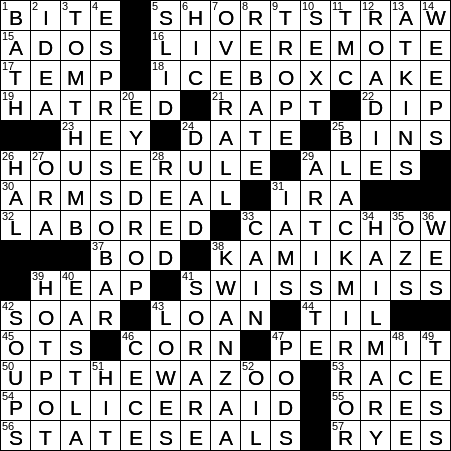 Purina began business in 1894 as an operation for producing feed for farm animals. A few years later, in 1902, the Ralston name was introduced when Webster Edgerly joined the business. Edgerly was the founder of a controversial social movement called Ralstonism. Central to the movement was personal health, with RALSTON standing for Regime, Activity, Light, Strength, Temperation, Oxygen and Nature.

Swiss Miss is a brand of cocoa powder and related products that is sold by ConAgra Foods. The original Swiss Miss product was introduced in the 1950s and was sold only to airlines. The airlines used it to make hot cocoa for their passengers. The beverage was so popular on flights that it was later added to grocery store shelves.

45. Some tiebreakers, for short : OTS

The slang term “up the wazoo” means “to have plenty”. It’s pretty vulgar slang and is a specific anatomical reference, so I don’t think it really belongs in a crossword …

A trope is a figure of speech. The term “trope” comes from the Greek word “tropos” that has the same meaning.

The Movie Channel is owned by Showtime, which in turn is subsidiary of CBS. The channel’s name is often abbreviated to “TMC”, although this is informal usage.

12. One helping to set the stage : ROADIE

13. Doctor with a well-known diet : ATKINS

Stanley Kubrick was a film director from New York who worked mainly in the UK. Kubrick directed “Spartacus” in Hollywood in 1960, and then relocated to the UK to shoot “Lolita” in 1962. His next film was “Doctor Strangelove”, which also had to be shot in the UK. At that point, Kubrick decided to make England his home.

28. College from which Steve Jobs dropped out : REED

Iams dog food was introduced by the animal nutritionist Paul Iams. He felt that household pets were suffering somewhat by being fed a diet of table scraps, so he developed a dry dog food that he felt was more nutritious and suitable for pet dogs. He founded the Iams company, now part of Procter & Gamble, in 1946.

Kwanzaa is a celebration of African heritage that lasts from December 26 to January 1 annually. The holiday was introduced in 1966 as an alternative to the existing holidays at the end of the year. The name comes from the Swahili phrase “matunda ya kwanza”, meaning “first fruits of the harvest”. The seven days of Kwanzaa are dedicated to seven core principles known as “Nguzo Saba”.

East Los Angeles (usually “East LA”) is the most populous “census-designated place” in California, and is home to over 125,000 people.

48. Drink that can cause brain freeze : ICEE