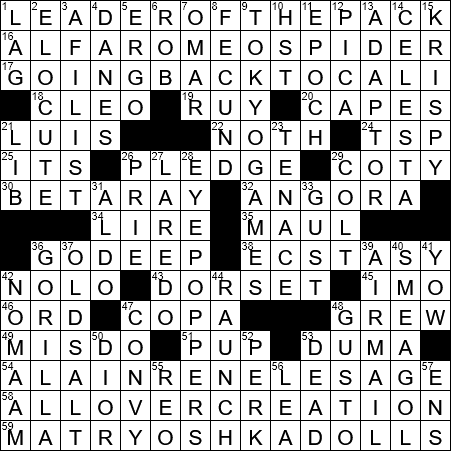 The Spider is a roadster that was manufactured by Italian auto company Alfa Romeo. It was in production from 1966 to 1993, and is considered a design classic.

17. 1997 Notorious B.I.G. hit whose title lyric precedes “strictly for the weather” : GOING BACK TO CALI

18. Queen who styled herself as Isis, familiarly : CLEO

A gambit is a chess opening that intrinsically involves the sacrifice of a piece (usually a pawn) with the intent of gaining an advantage. The term “gambit” was first used by the Spanish priest Ruy Lopez de Segura who took it from the Italian expression “dare il gambetto” meaning “to put a leg forward to trip someone”. Said priest gave his name to the common Ruy Lopez opening, which paradoxically is not a gambit in that there is no sacrifice. The chess term dates back to the mid-1600s. We’ve been using “gambit” more generally for any opening move designed to gain advantage since the mid-1800s.

The actor Chris Noth is best known for his television roles. Noth played Detective Mike Logan on “Law & Order” and Big on “Sex and the City”. More recently, he played the “bad husband” on the excellent show “The Good Wife”.

“The Good Wife” is a legal drama showing on CBS starring Julianna Margulies as Alicia Florrick, a litigator who returns to practicing the law after spending 13 years as a stay-at-home mom. I binge-watched the show some time back and found it to be well-written, with a great cast and great acting …

Cashmere wool comes from not only the Cashmere goat, but also from other types of goat. Technically, cashmere isn’t really a wool, but rather a hair. Unlike hair, wool is elastic and grows in clusters.

The word “lira” is used in a number of countries for currency. “Lira” comes from the Latin for “pound” and is derived from a British pound sterling, the value of a Troy pound of silver. For example, the lira (plural “lire”) was the official currency of Italy before the country changed over to the euro in 2002.

“Nolo contendere” (sometimes shortened to “nolo”) is a legal term that translates from Latin as “I do not wish to contend”. It’s the plea of no contest, and is an alternative to guilty and not guilty, meaning that one doesn’t admit guilt but nor does one dispute the charge.

Dorset is a county on the coast in South West England, with the county town of Dorchester. If you’ve read Thomas Hardy (he was born near Dorchester), you might be familiar with Dorset as he set many of his novels in the county.

A duma is a representative assembly in Russia. The word “dumat” in Russian means “to think, consider”.

Matryoshka dolls are those wooden nesting dolls that are on sale at every tourist trap across Russia. “Matryoshka” is Russian for “little matron”.

4. Many employees of the Lego company : DANES

The character Omar Little is played by Michael K. Williams on the HBO series “The Wire”.

14. Instrument whose name comes from the Latin for “heavenly” : CELESTA

A celesta (also “celeste”) is a keyboard instrument in which the keys operate hammers that strike a set of metal plates. The resulting sound is similar to that from a glockenspiel, although it is much softer in tone as the celesta’s plates are suspended over wooden resonators. I’d say that the most famous musical work featuring a celesta is Tchaikovsky’s “Dance of the Sugar Plum Fairy” from his ballet “The Nutcracker”.

In the wonderful card game of bridge, a tenace is a broken sequence of honor cards, like AQ or KJ.

27. City on the Mexican border : LAREDO

Samuel Colt was fascinated as a young man by the science behind gunpowder and its used in weapons. He decided early on in his life, that he would respond to the challenge of the day, how to achieve the impossible, a weapon that fire more than the two times available at the time using a double-barreled rifle. He came up with the concept of the revolver while at sea, modeling his design on the spoked wheel that steered the ships on which he served. His revolver made him a very rich man in his own lifetime. By the time he died in 1862, his estate was valued at around $15 million. Can you imagine; $15 million back in 1862?

In the stories by Edgar Rice Burroughs, Tarzan of the Apes was actually Englishman John Clayton, Viscount Greystoke.

40. Hobbit corrupted by the Ring : SMEAGOL

That would be Tolkien stuff …

Bert Convy was an American actor, although he was perhaps better known as a game show host. Famously. Convy was host for the shows “Tattletales”, “Super Password” and “Win, Lose or Draw”.

There is a pair of letters N (ens) in the word “nines”.