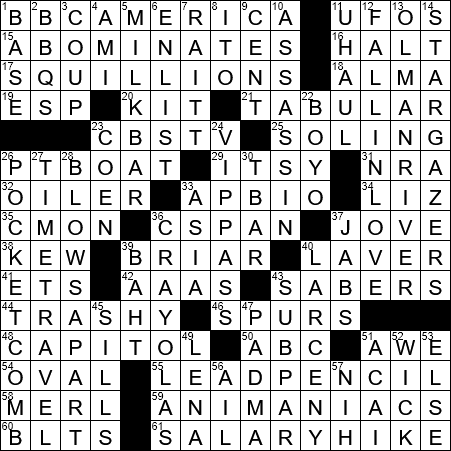 Constructed by: Temple Brown
Edited by: Will Shortz

Alma Reville was a film director and screenwriter, and the wife of famed director Alfred Hitchcock. Reville appeared as a major character in the 2012 movie “Hitchcock”, in which she was played by the very capable Helen Mirren.

PT boats were motor torpedo boats, small speedy vessels that used torpedoes as their primary weapon against large surface ships. The “PT” stands for “Patrol Torpedo”. The most famous PT boats that served during WWII were probably PT-41 that carried General Douglas MacArthur and his family from Corregidor to Mindanao in his escape from the Philippines, and PT-109 that was commanded by Lieutenant John F. Kennedy, future President of the United States.

Future US president John F. Kennedy served with the US Navy during WWII. Famously, Lieutenant Kennedy was assigned to a Motor Torpedo Squadron. Kennedy’s most noted command was Motor Torpedo Boat PT-109. PT-109 was sunk in an engagement with a Japanese destroyer in the Solomon Islands. The story of the crew’s evasion of the Japanese and subsequent rescue is told in the 1963 film “PT 109”.

“Briar” is a generic name for several plants that have thorns or prickles, including the rose. Famously, Br’er Rabbit lives in a briar patch.

By most definitions, the Napoleonic Era started with Napoleon Bonaparte’s coup d’état that effectively ended the French Revolution. The era itself ended with Napoleon’s defeat at the Battle of Waterloo.

48. Site on the National Mall : CAPITOL

I grew up with the HB method of grading pencils, from “hardness” to “blackness”. Here in the US we sometimes use a numerical grading system, with #2 being the equivalent of HB. The numerical system was introduced in the US by one John Thoreau, father of famed author and hero of mine Henry David Thoreau.

Bonnie Raitt is a blues singer who is originally from Burbank, California. Raitt has won nine Grammys for her work, but she is perhaps as well known for her political activism as she is for her music. She was no fan of President George W. Bush while he was in office, and she sure did show it.

Something that is “not worth a red cent” has very little value. The “red” reference is to the color of a copper penny.

I think it’s great to see two brothers working together and being so successful. Joel and Ethan Coen are two movie producers and directors who both live in New York City. The Coen brothers do love the movie-making business and they even married industry “insiders”. Ethan’s wife is film editor Tricia Cooke, and Joel is married to one of my favorite actresses, the lovely Frances McDormand.

The greaser subculture developed in the US in the late 1940s, and held quite a bit of sway until the mid-1960s. A typical greaser was an Italian- or Hispanic-American youth living in an urban area. Although the term “greaser” was already in the language, it had been used derogatively to describe poor laborers of Italian and Mexican descent. In its new usage, “greaser” referred to the greased-back hair styles worn by male members of the subculture. Examples of greasers in the media are Marlon Brando’s character in 1953’s “The Wild One”, members of the Jets and Sharks gangs in 1957’s “West Side Story”, and the cool kids in 1971’s “Grease”.

The 1964 Summer Olympic Games were held in Tokyo, and were the first Olympics held in Asia. The 1940 games had been scheduled for Tokyo, but they were moved to Helsinki after Japan invaded China, and eventually were cancelled completely due to WWII. The 1964 Olympics were also the first games in which South Africa was barred due to the apartheid system in sports.

Padma Lakshmi is a model from India. She is very much into cooking and has published an award-winning cookbook. She is now the host of the American TV show “Top Chef”.