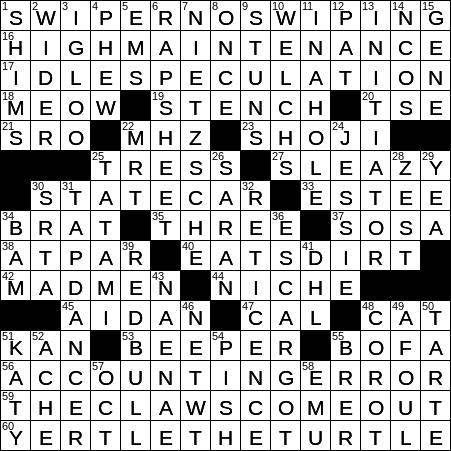 A shoji is a door, window or room divider in Japanese architecture. A shoji consists of translucent paper stretched over a wooden frame.

Aidan Quinn is an Irish-American actor. Quinn was born in Chicago but spent some years growing up in Ireland. Mainly known as a movie actor, Quinn is currently playing the role of Captain Tommy Gregson on the excellent TV series “Elementary” that is centered on a modern-day Sherlock Holmes.

The University of California, Berkeley (Cal) is the most difficult public university to get into in the world. It opened in 1869 and is named for Anglo-Irish philosopher George Berkeley.

Leland Stanford became a very successful businessman in California after moving there from New York during the Gold Rush. Stanford then served as governor of the state for two years, and later US Senator for California. He founded the Leland Stanford Junior University in memory of his teenage son who died of typhoid fever while the family was travelling in Italy in 1884. The university opened its doors for business in 1891, and the first student admitted was none other than Herbert Hoover, the man would become the 31st President of the US.

Bank of America (B of A)

Those would be shoe sizes.

There are three letters M (ems) in the word “mummies”.

7. Philosopher who said “What does not kill me makes me stronger” : NIETZSCHE

Friedrich Nietzsche was a German philosopher. He’s not my cup of tea …

Welch’s is a beverage and food company that was founded in 1869 by Thomas Bramwell Welch and Lee Steger Welch in Vineland, New Jersey. The company’s first product was “Dr. Welch’s Unfermented Wine”, which was later rebranded as “Welch’s Grape Juice”.

Dancer, actor and singer Fred Astaire never won a competitive Academy Award, and received just one nomination: for Best Supporting Actor in 1974’s “The Towering Inferno”. However, was presented with an honorary Academy Award in the 1949 season “for his unique artistry and his contributions to the technique of musical pictures”. That honorary Oscar was presented by his longtime film and dance partner Ginger Rogers.

Jean-Baptiste-Camille Corot was a French painter mainly noted for his landscapes, working just before the birth of the Impressionist movement. His lovely painting “The Bridge at Narni” from 1826 can be seen at the Musée du Louvre in Paris.

Tarte Tatin is a upside-down apple tart that is very popular in France. The dessert is named for the Hotel Tatin in Lamotte-Beuvron (about 100 miles south of Paris), where it was invented.