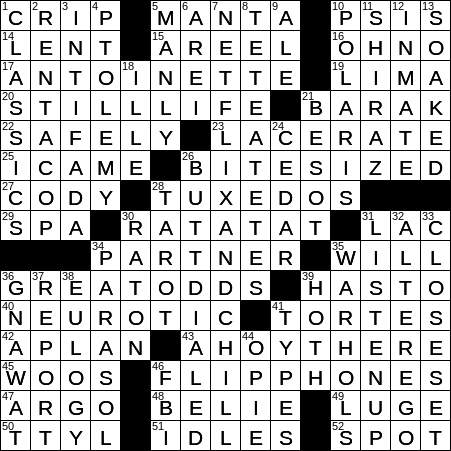 Constructed by: Ben Gross & James Somers
Edited by: Will Shortz

The manta ray is the largest species of ray, with the largest one recorded at over 25 feet across and weighing 5,100 pounds. It is sometimes referred to as the sea devil.

“Bouquet” comes from the French word for a “bunch” in the sense of bunch of flowers. In French, the term is derived from an older word describing a little wood or small grove of trees.

Lake Neuchâtel is the largest lake that lies entirely within Switzerland’s borders.

“Rent-a-cop” is a derogatory term for a security guard. The term was used in 1988 as the title for a much-panned comedy-action film starring Burt Reynolds and Liza Minnelli. Minnelli was named Worst Actress at the 1988 Golden Raspberry Awards for her performance in “Rent-A-Cop”, and also for “Arthur 2: On the Rocks” that came out the same year.

4. Astronomer with a geocentric model of the universe : PTOLEMY

Claudius Ptolemy was an Egyptian of Greek ethnicity who lived in the days when Egypt was ruled by Ancient Rome. Ptolemy was, among other things, a mathematician and astronomer. He published a famous treatise on astronomy called “Almagest” which included a list of 48 constellations in a star catalogue. The Ptolemaic system described the cosmos geocentrically, with the Earth at the center and other celestial bodies orbiting. Ptolemy also wrote a work titled “Geography”, which compiled much of the geographical knowledge of the Roman Empire at that time. Centuries after Ptolemy died, Christopher Columbus used the maps in “Geography” to aid him on his voyages of discovery.

A man described as macho shows pride in his masculinity. “Macho” is a Spanish word for “male animal”.

When I was a school-kid back in Ireland, Robert Frost’s “Stopping by Woods on a Snowy Evening” was our first introduction to American poetry, and what a lovely introduction it was:

A “tête-à-tête” is a one-on-one meeting, literally “head-to-head” in French.

“Joint” is a slang term for “prison” that may only date back to the 1950s. The term can also apply to any location where shady activities take place, and that usage dates back to the 1870s.

“Butt dialing” is an alternative name for “pocket dialing”, the accidental placing of a call while a phone is in one’s pocket or purse.

A eulogy is a speech or piece of writing that praises someone who has recently passed away or who is retiring. “Eulogy” comes from the Greek word “eulogia” meaning “praise”.

39. Ice planet in “The Empire Strikes Back” : HOTH

“Hunt and peck” is a way to describe two-fingered typing.