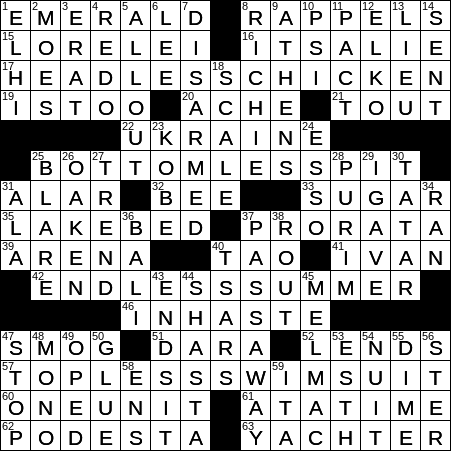 Today’s Theme (according to Bill): Less of a Clue

Themed clues are words less one letter. The position of the lost letter in the clue points us toward a common phrase, which is the answer:

8. Goes down a steep rock face, in a way : RAPPELS

The Republic of Moldova (usually referred to as “Moldova”) was the Moldavian Socialist Republic before the dissolution of the Soviet Union.

37. To each accordingly : PRO RATA

8. Friend of the Fonz : RICHIE

Richie Cunningham was originally written as the lead character on the sitcom “Happy Days”, but the role became overshadowed by the colorful Fonzie. Richie was played by the great Ron Howard, and the Fonz by Henry Winkler.

10. Letter that appears twice in the Schrödinger equation : PSI

Erwin Schrödinger was an Austrian theoretical physicist, one of the so-called “fathers of Quantum Mechanics”. He won the Nobel Prize for Physics in 1933 for developing the Schrödinger Equation, the “Newton’s Law” of Quantum Mechanics. Famously, Schrödinger devised a thought experiment that illustrates the concept of a paradox. The scenario, known as “Schrödinger’s cat”, presents us with a cat that can be both alive and dead at the same time. I used to be able to understand Schrödinger’s Cat, and then I got old …

Kobe is a city on the island of Honshu in Japan. Here is North America, the city of Kobe is perhaps most famous for its beef. And yes, basketball star Kobe Bryant is named after that very same beef.

In the “Star Trek” universe, Starfleet is the military service maintained by the United Federation of Planets. Famously, Starfleet is also tasked with deep-space exploration, to boldly go where no man has gone before …