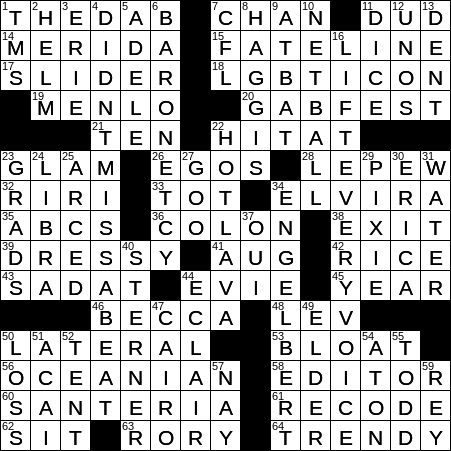 Themed answers are all in the down-direction, and include singing VOICES as hidden words. Those hidden words are written in the up-directions, have been LIFTED:

Charlie Chan is the main character in a series of novels by Earl Derr Biggers. Chan is a Chinese-American detective working with the Honolulu police department. There have been almost 50 movies made featuring the Charlie Chan character.

Sliders are small hamburgers. One suggestion is that the “slider” originated in the US Navy, with the name being a reference to greasy hamburgers sliding back and forth across the grill as a ship pitches and rolls. More recently, the slider became associated with the White Castle fast food chain of restaurants. White Castle introduced the “Slyder” in 1985.

The actress Judy Garland’s real name was Frances Gumm. Garland was respected and loved both within and without the entertainment industry. She was the youngest recipient, at 39 years old, of the Golden Globe Cecil B. DeMille Award for lifetime achievement in the motion picture industry.

The singer Rihanna was born and grew up on the island of Barbados and moved to the US when she was 16-years-old to pursue a singing career. “Rihanna” is her stage name, as she was born Robyn Rihanna Fenty. The name “Rihanna” is derived from the Welsh name “Rhiannon”.

“Squirt” is a slang term describing a small child.

42. The Owls of Conference USA : RICE

45. Datum for a car aficionado : YEAR

An aficionado is an enthusiast. Imported from Spanish, “aficionado” was originally used in English to describe a devotee of bullfighting.

1. Symbols in superscript, for short : TMS

Tottenham is an area in north London in England. It is home to a famous football (soccer) club called Tottenham Hotspur, the team that I used to follow as a kid many moons ago …

The British title of baronet has been awarded since the 14th century. The present-day hereditary baronets data back to 1611 when James I basically sold the title, awarding it to gentlemen of good birth who were willing to pay for the upkeep of thirty soldiers for three years.

The Grey Cup is a trophy awarded annually to the championship team in the Canadian Football League (CFL). The trophy is named for Earl Grey, the ex-governor general of Canada who commissioned the award. Grey had intended that the award be given annually to the country’s senior amateur hockey team, but Sir Montagu Allan beat him to the punch and the Allan Cup has been used for that purpose ever since. And so instead, the Grey Cup went to the sport of football.

“Lift Every Voice and Sing” is a hymn originally written as a poem By James Weldon Johnson and set to his music by his brother John Rosamond Johnson. It was first performed in 1900 for the holiday honoring Lincoln’s Birthday. The song is often called the “The African-American National Anthem”.

Chuck Todd is a television journalist. Todd was the Chief White House Correspondent for NBC, before taking over as moderator of “Meet the Press” in 2014.

Rey is the central character in the the movie “Star Wars: The Force Awakens”. Rey is played by British actress Daisy Ridley.