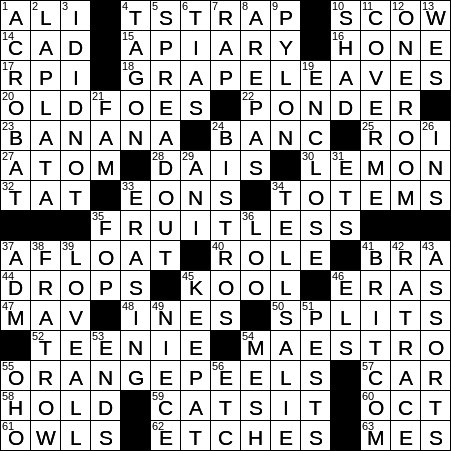 Themed answers are FRUITLESS, fruits that make an exit!

“Aladdin” is a famous tale in “Arabian Nights”, also called “The Book of One Thousand and One Nights”. However, there is no evidence at all that the story was in the original collection. It is generally believed that one Antoine Galland introduced the tale when he translated “Arabian Nights” into French in the early 1700s.

(50A. *See 23-Across : … SPLITS)
The banana split was created in Latrobe, Pennsylvania in 1904. This particular sundae was the idea of David Stickler, a young apprentice pharmacist at the Tassel Pharmacy’s soda fountain.

The band called Kool & the Gang have been around since the mid-sixties, and is most famous for the hit “Celebration”.

An Old Fashioned cocktail is usually made from whiskey or brandy that is muddled with sugar and bitters, and then a twist of citrus rind added.

“Mes” is the French for “my”, when applied to more than one object or individual.

1. One going head over heels? : ACROBAT

Arepa is a cornmeal cake or bread that is popular in Colombian and Venezuelan cuisine in particular. Each arepa has a flat, round shape and is often split to make a sandwich.

A pylon is a tower that is used to mark the turning point in an air race.

“Isle of Dogs” is a 2018 animated and stop-action film by Wes Anderson. The movie has a science-fiction storyline, and is set in near-future Japan. All dogs are banished to Trash Island after an outbreak of dog flu threatens to cross into the human population. The voice cast of “Isle of Dogs” is very impressive, and includes Bryan Cranston, Edward Norton, Bill Murray, Jeff Goldblum, Frances McDormand, Scarlett Johansson, Yoko Ono and many other A-list names.

“The Adventures of Pinocchio” is an 1883 children’s novel by Carlo Collodi. It is all about an animated puppet named Pinocchio and Geppetto, his poor woodcarver father. Pinocchio is prone to telling lies, the stress of which causes his short nose to become longer.

I’d say that in North America, comedian Ricky Gervais is best known as the writer and lead actor in the original version of the TV show “The Office”. Gervais’s role was taken on by Steve Carell in the US rendition of the sitcom.

We use “rat race” figuratively to describe an endless, pointless pursuit. The term comes from the laboratory, where one might imagine rats racing around a maze in search of some cheese.