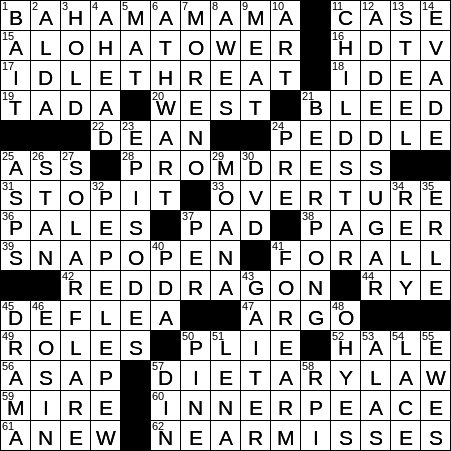 Constructed by: Daniel Nierenberg
Edited by: Will Shortz

If you’d care to try the drink called a Bahama Mama, one recipe is:

Aloha Tower is a lighthouse that sits at Pier 9 in Honolulu Harbor. Aloha Tower was the tallest structure in Hawaii for many years, standing at 10 stories with a 40 foot flag mast on top.

The four people playing a game of bridge are positioned around a table at seats called north, east, south and west. Each player belongs to a pair, with north playing with south, and east playing with west.

According to the four Gospels in the Bible, Jesus made a triumphal entry into Jerusalem after having raised Lazarus from the dead. He descended from the Mount of Olives and rode into the city on an ass or a donkey.

Palm Sunday is a celebration in the Christian tradition that falls on the Sunday before Easter Sunday. The day commemorates the triumphal entry of Jesus into Jerusalem, soon after he raised Lazarus from the dead. The faithful carry palms on the day, a reference to the palms scattered in front of Jesus by the welcoming crowd. In many churches, the palms are saved from Palm Sunday and then burned on Shrove Tuesday, The ash from the palms is then used to anoint the faithful on the next day: Ash Wednesday.

An oratorio is a large musical work for orchestra, choir and solo singers, and usually has a religious theme. It is similar to an opera, but without the action, costume and scenery.

Hannibal Lecter is a character created by author Thomas Harris, first appearing in his novel “Red Dragon”. Lecter also features prominently in “Red Dragon’s” famous sequel “The Silence of the Lambs”, and even more so in the third book, “Hannibal Rising”. The latter title is a “prequel” exploring Lecter’s childhood and development into a serial killer. Famously, Lecter was portrayed in the 1991 film version of “The Silence of the Lambs” by Welsh actor Anthony Hopkins. Hopkins also played Lecter in 2001’s “Hannibal” and in 2002’s “Red Dragon”. Lector was also played by Brian Cox (“Manhunter” – 1986), by Gaspard Ulliel (“Hannibal Rising” – 2007), and by Mad Mikkelsen (“Hannibal” – TV series).

47 Ship with a prophetic prow : ARGO

7 Rita who was awarded a Presidential Medal of Freedom in 2004 : MORENO

The Puerto Rican singer, dancer and actress Rita Moreno is one of the few performers to have won an Oscar, Emmy, Grammy and Tony. Moreno got her big break, and won her Oscar, for playing Anita in the 1961 screen adaption of “West Side Story”. And, she was awarded the Presidential Medal of Freedom by President George W. Bush in 2004.

Child star Shirley Temple made her first movie in 1932 at the age of three. She became a star in 1934 with the release of the film “Bright Eyes”. Temple retired from show business at the age of 22, but made a brief attempt to resume her career in the late fifties and early sixties. She served as a board member for several organizations, including the Walt Disney Company. She also ran unsuccessfully for the US Congress in 1967, but was appointed as US Ambassador to Ghana in 1974, and then to Czechoslovakia in 1989.

The game of beer pong is also known as “Beirut”. Beer pong apparently originated as a drinking game in the fraternities of Dartmouth College in the fifties, when it was played with paddles and a ping pong net on a table. The origin of the “Beirut” name is less clear, but it probably was coined in while the Lebanese Civil War was raging in late seventies and the eighties.

In the animal kingdom, the group of reptiles known as snakes (and snake-like lizards) are called “ophidians”. “Ophi” is the Greek word for “serpent”.

26 Getz who was nicknamed “The Sound” : STAN

A solar flare is a sudden energy release from the surface of the Sun that can be perceived as a flash of brightness and an eruption of magnetic energy. That magnetic energy reaches the Earth about two days after the event, and can disrupt long-range radio communications on our planet. The location of solar flares has been strongly linked to sunspot groups, groups of dark spots on the Sun’s surface.

The abbreviation “DVD” doesn’t actually stand for anything these days, although it originally was short for Digital Video Disk. The use of the word “video” was dropped as DVDs started to be used for storing a lot more than video. But, that seems like a long time ago …

41 The biblical cubit was based on its length : FOREARM

A gaiter is a heavy cloth or piece of leather that covers the leg from the instep up to the ankle or perhaps knee.

Eosin is a red dye that fluoresces under light, and that is used in the lab as a stain on microscope slides. It is particularly effective in staining animal tissues. Eosin is also used as a toner in cosmetics.

That would be a pinewood derby.

51 River to the Arctic Ocean : LENA