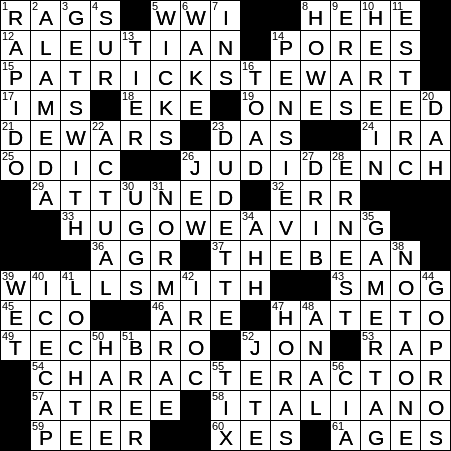 Themed answers are ACTORS who famously played CHARACTERS with a single letter as a name:

“A Farewell to Arms” is a somewhat autobiographical novel written by Ernest Hemingway, telling the story of an American ambulance driver serving with the Italian army during WWI. The most famous screen adaptation is probably the 1957 version starring Rock Hudson and Jennifer Jones.

Unalaska Island is one of the Aleutian chain of islands off the coast of Alaska. Dutch Harbor, located within the city of Unalaska, is the largest fisheries port in the whole of the United States.

Those would be pores in an animal hide.

Dewar’s is a blended Scotch whisky introduced to the market in 1846 by John Dewar. Dewar’s White Label is the company’s most popular Scotch. It was first sold in 1899, and with a taste that is described as “heather and honey”. Dewar’s also make some single malts, under the labels Aberfeldy 12 and Aberfeldy 21. Today, Dewar’s is owned by Bacardi.

24 Part of some future planning, for short : IRA

Pindar was an ancient Greek poet who is best known perhaps for composing a series of “Victory Odes” that celebrated triumph in competition, most notably the Olympian Games of the day.

“GoldenEye” was the first film in the “James Bond” series of movies to feature Pierce Brosnan as the lead. The title is a nod to the author of the “James Bond” novels, Ian Fleming. Fleming had worked for British Naval Intelligence during the war, and on Operation Goldeneye in particular. Fleming also used Goldeneye as the name for his estate in Jamaica.

The US Department of Agriculture (USDA) actually dates back to 1862, when it was established by then-president Abraham Lincoln. Lincoln referred to the USDA as the “people’s department” as our economy had such a vast agrarian base back then.

37 Chicago landmark nicknamed for its resemblance to a legume : THE BEAN

The multi-talented Will Smith started his performing career as a rap artist in the late 1980s using the stage name “the Fresh Prince”. He then landed the lead role in the hit sitcom “The Fresh Prince of Bel-Air”, and parlayed that into an extremely successful movie career. Smith has two children with his second wife, actress Jada Koren Pinkett. His son Jaden Smith co-starred with his dad in the movies “The Pursuit of Happyness” and “After Earth”. His daughter Willow Smith appeared with Will in the movie “I am Legend”.

58 What Dante wrote in : ITALIANO

“Alameda” is Spanish for “a place full of poplars”. There are number of locations in the US and elsewhere with the name “Alameda”, including the county of Alameda, California where I am right now, writing this post. Alameda County is also home to the city of Alameda located on Alameda Island.

Julia Ward Howe was an active pacifist and suffragist. Howe is also well known as the writer of the lyrics to “The Battle Hymn of the Republic”.

28 Rutherford known as “The Father of Nuclear Physics” : ERNEST