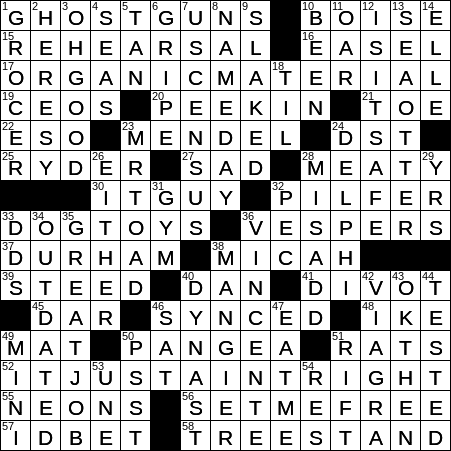 10 Capital known as the City of Trees : BOISE

16 Something holding up the works? : EASEL

“Pelf” is money that has been gained by illegal means. The exact origin of the term is unclear, but it is probably related to the verb “to pilfer”.

In the Roman Catholic tradition, there is an official set of daily prayers known as the Liturgy of the Hours. The traditional list of prayers is:

41 A caddie may retrieve one : DIVOT

Pangaea (also “Pangea”) was a supercontinent that existed during the age of the dinosaurs, the late Paleozoic and early Mesozoic eras. Pangaea broke apart due to movement of tectonic plates in the Earth’s crust. All of today’s continents were once part of Pangaea.

To slake is to satisfy a craving, as in slaking one’s thirst.

14 Magazine that’s weekly in France but monthly in the U.S. : ELLE

23 He has a Wild Ride at Disneyland : MR TOAD

33 Deg. that requires the study of calculus : DDS

Vincente Minnelli was a Hollywood movie director. One movie that he directed was 1944’s “Meet Me in St. Louis”, during the filming of which he fell in love with the movie’s star, Judy Garland. The following year, the two were married. A year later, along came their only child, Liza Minnelli. The marriage only lasted another five years.

47 Message on the “cake car” in the climactic scene of “Animal House” : EAT ME