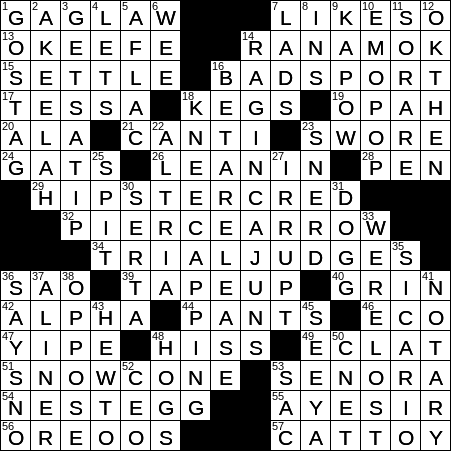 Michael O’Keefe played Danny Noonan in the film “Caddyshack” (I’m not a big fan of that movie). He also appeared in the George Clooney film “Michael Clayton”. O’Keefe was married for several years to singer Bonnie Raitt.

Tessa Virtue is a Canadian ice dancer who won the 2010 and 2018 Olympic gold along with her partner Scott Moir. Virtue and Moir have been skating together since 1997, when they were seven and nine years old respectively. That makes them the longest-standing Canadian ice dance team in history.

The Clink (also “the Clynke”) was a celebrated prison in Southwark, England owned by the Bishop of Winchester. The prison was given the name “the clink”, probably from the sound made by metal keys in metal locks and metal chains around ankles. The prison was closed down in 1780, and around the same time “clink” entered the English language as a slang term for “jail”.’

São Miguel Island is the largest island in the archipelago known as the Azores. It is known locally as “the Green Island”.

The term “slacks” was introduced in the early 1800s with the the meaning “loose trousers”. Those early slacks were part of a military uniform.

Oreo O’s were made by Post from 1998 to 2007. Oreo O’s were basically O-shaped (like Cheerios) but chocolate-flavored, dark brown in color and with white sprinkles on them. Oh, and lots of sugar.

Philip Morris changed its name to Altria in 2003 as part of a reorganization. The reasons for the name change are the subject of speculation but industry commentators agree that the company wanted to distance itself from the historical negativity associated with the Philip Morris name due to the many legal and social issues created by its tobacco products.

“Sicario” is a 2015 crime thriller starring Emily Blunt, Benicio del Toro and Josh Brolin. Blunt stars as an idealistic FBI agent who is part of US government task force charged with bringing down a Mexican drug cartel. The word “sicario” is Spanish for “hitman”.

Aliner is a line of trailed popup campers that have a clever A-frame construction when erected.

41 Worker with a seal : NOTARY

A notary public is a public officer licensed to perform specific legal actions in non-contentious legal matters. The main duties are to administer oaths, take affidavits and witness the execution of documents.

52 Board appointee, for short : CEO