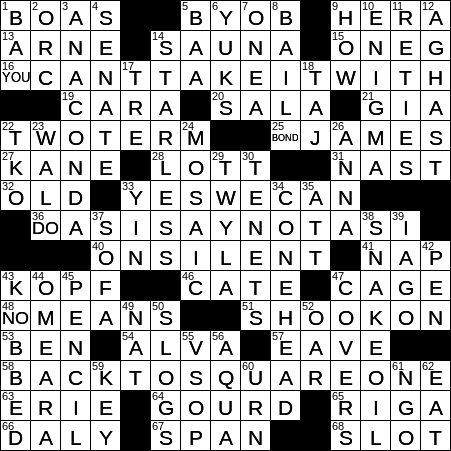 Today’s Reveal Answer: Back to Square One

Themed answers start with a word in SQUARE ONE. We have to go BACK TO SQUARE ONE in order to finish that same answer:

9 Goddess in a chariot pulled by peacocks : HERA

14 Place where beads are made : SAUNA

Those would be beads of sweat.

20 Division of a hacienda : SALA

The DC Comics superhero Batman was created in 1939 by Bob Kane and Bill Finger.

31 Father of the American Cartoon : NAST

What we mostly call a “cell phone” here in North America is more usually referred to as a “mobile phone” in Britain and Ireland. My favorite term for the device is used in Germany, where it is called a “Handy”.

The actress Tyne Daly really came into the public eye playing Detective Lacey in “Cagney and Lacey”. From 1999 to 2005, Daly played the mother of the title character in the TV show “Judging Amy”.

One A Day is a line of multivitamins made by Bayer. One A Day was introduced way back in 1940.

17 Number of sides on a triangolo : TRE

In Italian, a “triangolo” (triangle) has “tre” (three) sides.

I love Twyla Tharp’s choreography, and her “patented moves”. Tharp was born in Portland, Indiana in 1941. She was named for Twila Thornburg, the “Pig Princess” of the 89th Annual Muncie Fair in Indiana. That’s one to tell to the grandkids …

39 Literary character who says “I will wear my heart upon my sleeve” : IAGO

Cognac is a famous variety of brandy named after the town of Cognac in the very west of France. To be called cognac, the brandy must be distilled twice in copper pot stills and aged at least two years in very specific French oak barrels.

59 What makes a tumbler spin : KEY

That would be a tumbler in a lock.

61 Doctors Without Borders or Oxfam, in brief : NGO

Oxfam was founded in 1942 in Oxford, England, and was originally called Oxford Committee for Famine Relief. The original mission of Oxfam was to persuade the British government to allow food into Greece during WWII in the days the country was occupied by the Axis Powers. The name OXFAM was adopted in 1965. Prior to that date, OXFAM was quite simply the organization’s telegraph address (remember telegraphs?).

1 Showy accessories : BOAS
5 Invitation stipulation : BYOB
9 Goddess in a chariot pulled by peacocks : HERA
13 ___ Duncan, Obama education secretary : ARNE
14 Place where beads are made : SAUNA
15 So-called universal donor type, for short : O-NEG
16 Saying suggesting that worldly possessions should be enjoyed : YOU CAN’T TAKE IT WITH YOU
19 Beloved, in Bologna : CARA
20 Division of a hacienda : SALA
21 Actress Scala : GIA
22 Like Bill Clinton’s presidency : TWO-TERM
25 Iconic introduction in cinema : BOND, JAMES BOND
27 Batman co-creator Bob : KANE
28 Longtime Mississippi politico Trent : LOTT
31 Father of the American Cartoon : NAST
32 What one gets after many years of work : OLD
33 2008 political catchphrase : YES WE CAN
36 Instructor’s remark after making a mistake : DO AS I SAY, NOT AS I DO
40 Like a sleeper cell? : ON SILENT
41 Power ___ : NAP
43 Head: Ger. : KOPF
46 Actress Blanchett : CATE
47 “A forest bird never wants a ___”: Ibsen : CAGE
48 Insistent refusal : NO MEANS NO
51 Agreed to, in a way : SHOOK ON
53 Part of some Hebrew men’s names : BEN
54 Preceder of Edison : ALVA
57 What goes above and beyond? : EAVE
58 Where you go for a fresh start … or a hint for four answers in this puzzle : BACK TO SQUARE ONE
63 It’s a two-hour drive north of Pittsburgh : ERIE
64 Noggin : GOURD
65 European capital : RIGA
66 Tony and Emmy winner Tyne : DALY
67 Length : SPAN
68 Give an appointment to : SLOT