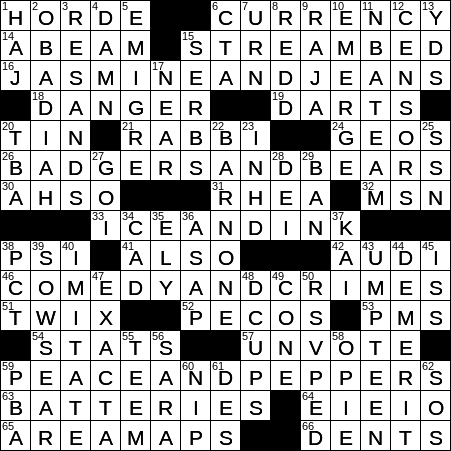 Today’s Theme (according to Bill): Jays, Bees, Seas and Peas

Themed clues use homophones of the letters J, B, C and P to refer to pairs words starting with those letters:

1 Crowd on the move : HORDE

The Golden Horde was a group of Mongols who ruled over what is now Russia, Ukraine, Kazakhstan, Moldova and the Caucasus, from the 1240s until 1502. It has been suggested that the name of the group derives from the yellow tents used by the rulers of the Golden Horde. And, the Golden Horde’s influence and rule led to the term “horde”, meaning large crowd, entering the English language via many languages spoken in Slavic Eastern Europe.

Geos were small vehicles manufactured by General Motors mainly in the nineties. Geos were designed to compete head-to-head with the small imports that were gaining market share at the time in the US. Some Geo models that you might remember are the Metro, the Prizm and the Storm. The cars were actually built as joint-ventures with Japanese manufacturers. The Prizm was a GM/Toyota project, the Metro was GM/Suzuki, and the Storm was GM/Isuzu.

The slang term “ahso” is used in American English to mean “I see”. The term derives from the Japanese expression “Ah so desu ka” meaning “Oh, that’s how it is”.

Rhea is the second-largest of Saturn’s moons, and the ninth-largest of all the moons in our solar system. The moon is named after the Titan Rhea from Greek mythology. Unlike our moon, Rhea might have an atmosphere of sorts, and even rings.

Dry ice is the solid form of carbon dioxide (CO2). The material’s main use is to preserve food and for cooling in general. It is also used in fog machines in theaters and haunted houses.

51 Candy bar with chocolate and caramel around a wafer : TWIX

52 Tributary of the Rio Grande : PECOS

53 Gandhi and others, for short : PMS

Indira Gandhi’s father was Jawaharlal Nehru, Prime Minister of India. Indira herself became prime minister in 1966. She was assassinated in 1984 by two of her own bodyguards, as she was walking to meet Peter Ustinov who was about to interview her for Irish television.

57 Follower of debate in the General Assembly, in brief : UN VOTE

The Allies of World War II were the countries opposing the Axis powers, the most prominent of which were Germany, Japan and Italy. When war broke out in 1939, the Allies consisted of France, Poland and the UK, with the independent countries of the British Commonwealth, such as Australia and Canada, joining a few days later. Although the Americans provided material support to the Allies throughout the conflict, the US did not officially join until December 1941, immediately after the Japanese attack on Pearl Harbor. It took until 1942 for the member countries to agree on a formal treaty of cooperation, doing so in a document known as the Declaration by United Nations. This declaration became the basis of the United Nations (UN), with the UN Charter being signed by 50 countries in 1945.

“The Haj” is a novel by the very successful American author Leon Uris. Set in Palestine in the first half of the 20th century, the novel follows the life of a Palestinian named Ishmael against the backdrop of the political events taking place in the area in that period of time.

The Book of Obadiah is the shortest book in the Hebrew Bible. It consists of just one chapter that is divided into 21 verses.

Redd Foxx was the stage name of John Elroy Sanford, best known for starring in “Sanford and Son”. “Sanford and Son” was an American version of a celebrated hit BBC sitcom that I grew up with in Ireland, called “Steptoe and Son”.

11 Thunder, but not Lightning : NBA TEAM

In football, a goal of the quarterback (QB) is to gain yards (yds.).

Ely is a city in eastern Nevada. The city was founded as a Pony Express stagecoach station, and then experienced a mining boom after copper was discovered locally in 1906. One of Ely’s former residents was First Lady Pat Nixon, who was born there in 1912.

Chiang Kai-Shek was the leader of the Nationalist Movement in China right through to the end of WWII. The Nationalists lost out in a Civil War to the Communists backed by the Soviet Union after war, and Chiang Kai-Shek and his government were forced to flee to Taiwan. Chiang Kai-shek claimed rule over China from Taiwan until his death in 1975.

The old proverb “you can’t make a silk purse out of a sow’s ear” was apparently coined by English clergyman Stephen Gross in his 1579 story “Ephemerides”. Gosson wrote therein “Seekinge too make a silke purse of a Sowes eare.”

To win a bet called an exacta (also called “perfecta”), the person betting must name the horses that finish first and second, and in the exact order. The related bet called the trifecta requires naming of the first, second and third-place finishers in the right order.

A kegler is a person who plays ten-pin bowling. “Kegel” is a German word meaning “bowling pin”.