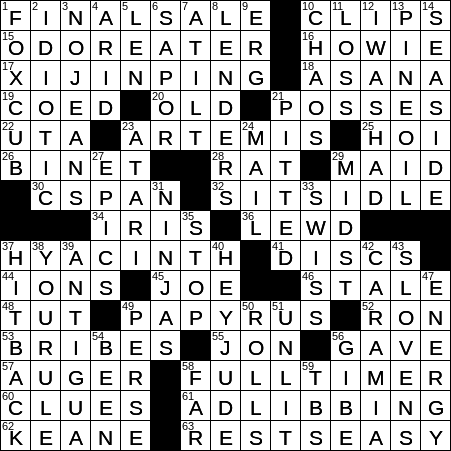 Howie Long is a retired NFL defensive end who is now a sportscaster for Fox Sports Networks. Long tried some acting after retiring from the the NFL, and appeared alongside John Travolta in the 1996 action movie “Broken Arrow”. Howie’s son Chris is also a defensive end in the NFL, and son Kyle is an NFL guard.

Xi Jinping is the current paramount leader of China. In China, the term “paramount leader” has been used since the days of Mao Zedong to describe the person who holds several leadership offices concurrently. The paramount leaders have been:

Uta Hagen was a German-born, American actress. Hagen married Jose Ferrer in 1938, but they were divorced ten years later after it was revealed that she was having a long-running affair with Paul Robeson. Her association with Robeson, a prominent civil rights activist, earned her a spot on the Hollywood Blacklist during the McCarthy Era. This forced her away from film, but towards a successful stage career in New York City.

49 Material for the Book of the Dead : PAPYRUS

An auger is a drill, a boring tool [Yawn].

Nîmes is a lovely city in the south of France. One of the claims to fame of the city is the invention of denim fabric. The French phrase “de Nimes” (from Nimes) gives us the word “denim”. Also, the French phrase “bleu de Genes” (blue of Genoa) gives us our word “jeans”.

In Greek mythology, Chaos was the first of the primeval gods born at the creation of the universe. Following Chaos came:

27 “The Last Samurai” and others : EPICS

31 Extras in “The Last Samurai” : NINJAS

39 Island in the West Indies : ANTIGUA