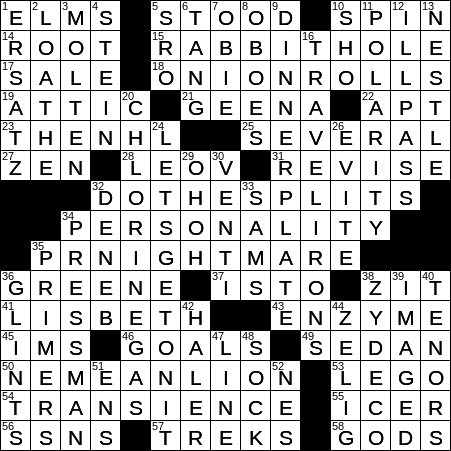 27 Discipline of some masters : ZEN

41 ___ Salander, protagonist in “The Girl With the Dragon Tattoo” : LISBETH

“The Girl with the Dragon Tattoo” is a 2011 film based on the hit novel of the same name by Stieg Larsson. Rooney Mara plays the title character, a computer hacker named Lisbeth Salander. Daniel Craig also stars, playing journalist Mikael Blomkvist. The 2011 movie wasn’t the first big screen adaptation of the novel. A Swedish film with the same name was released in 2009.

The names of enzymes usually include the suffix “-ase”. Enzymes are basically catalysts, chemicals that act to increase the rate of a particular chemical reaction. For example, starches will break down into sugars over time, especially under the right conditions. However, in the presence of the enzyme amylase (found in saliva) this production of sugar happens very, very quickly.

“Ephemera” was originally a medical term used to describe a fever that only lasted a day. The use of the term was expanded in the 17th century to include insects that were short-lived, and by end of the 18th century ephemera were any things of transitory existence.

Injection molding is a manufacturing process in which a molten material, such as a plastic, is injected into a mold. The molten material cools, and adopts the shape of the mold. The related process of die-casting involves the pouring of molten metal into a custom-shaped die.

8 They’re found among the reeds : OBOES

32 Star in the Summer Triangle : DENEB

Sam’s Club is owned and operated by Walmart, and is named after the company’s founder Sam Walton.

38 Offshoot of the blues : ZYDECO

José Carreras is a celebrated tenor from Barcelona who is perhaps best known to a wider audience as one of the Three Tenors, alongside Plácido Domingo and Luciano Pavarotti.

There are two letters N (ens) in the word “Cannes”.