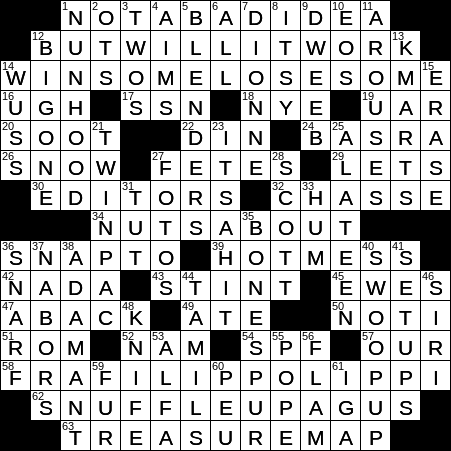 18 Bill of the Planetary Society : NYE

The United Arab Republic (UAR) was a union between Egypt and Syria made in 1958, and dissolved in 1961 when Syria pulled out of the arrangement.

Thanks to some helpful readers of this blog, I can point out that a tennis umpire might call a “let”, so that a player must re-serve.

A chassé is a step used in ballroom and other styles of dance. It has a gliding character and is a triple-step movement. The term “chassé” comes to popular dance from ballet.

The word “nothing” translates to “nada” in Spanish, and to “rien” in French.

“Our Day Will Come” was a number-one hit in 1963 for Ruby & The Romantics. This was the band’s only big seller, so I guess they get filed away as “one-hit wonders”.

58 Renaissance artist who’s famous for his “Coronation of the Virgin” : FRA FILIPPO LIPPI

Fra’ Filippo Lippi was an Italian painter in the 15th century who was also called “Lippo Lippi”, would you believe? The Victorian poet Robert Browning used the artist as the main character in a dramatic monologue he called “Fra Lippo Lippi”.

63 Prop in “Raiders of the Lost Ark” : TREASURE MAP

Dionne Warwick is a very, very successful singer, with more Top 100 hits than any other female vocalist other than Aretha Franklin. Warwick had a pretty successful cousin who was a singer as well … named Whitney Houston.

When cartoon beagle Snoopy adopts his “Joe Cool” alias, he puts on sunglasses and just leans against a wall doing nothing.

10 Titaness with a home on the edge of Oceanus : EOS

Kmart is the third largest discount store chain in the world, behind Wal-Mart and Target. The company was founded by S. S. Kresge in 1899, with the first outlets known as S. S. Kresge stores. The first “Kmart” stores opened in 1962, with the “K” standing for “Kresge”. Kmart is famous for its promotions known as “blue light specials”, a program first introduced in 1965 and discontinued in 1991. I remember being in a Kmart store soon after coming to live in the US. That evening an employee installed a light stand an aisle away from me, switched on a flashing blue light and there was some unintelligible announcement over the loudspeaker system. I had no idea what was going on …

Jim Nabors was discovered by Andy Griffith and brought onto “The Andy Griffith Show” as Gomer Pyle, the gas station attendant. Famously, Nabors then got his own show called “Gomer Pyle, U.S.M.C.”

There is a well-known story, which may not be true, that Pope Innocent VIII was the first person to receive a blood transfusion, in 1492. His physician Giacomo di San Genesio had the pope drink the blood of three 10-year-old boys, who subsequently died. Pope Innocent passed away himself a few days later, as the treatment apparently had little effect.

“Flim-flam” (sometimes “flam”) is another word for a confidence trick. The term has been in use since the 1500s, would you believe?