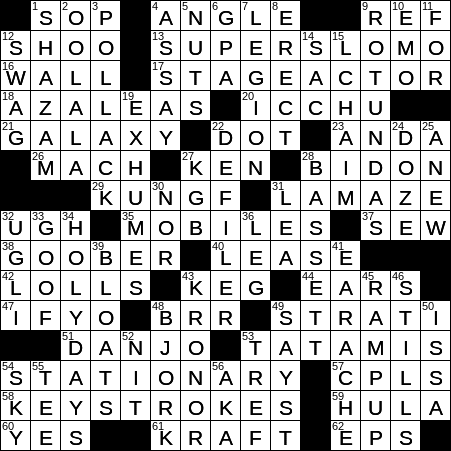 Today’s puzzle includes four “RAMPS”, each defined by 3 black squares extending diagonally upwards from left to right in the middle of the grid. These RAMPS replace the letters UP, and provide the central letters (UP) of themed answers that start at the bottom of each ramp, and end at the top:

16 Word after Great or before Street : WALL

Rhododendron is a genus of woody plants that usually have showy flowers. The rhododendron is the national flower of Nepal, where the bloom is also considered edible.

Ken Jeong is an actor from Detroit who is perhaps best known for playing the gangster Leslie Chow in the “The Hangover” series of films. Jeong isn’t only an actor; he has an M.D. degree and is a licensed physician in California.

“Kung Fu Panda” is a 2008 animated film from DreamWorks. It’s all about a panda who is expert in kung fu, as one might guess …

51 Fruit named for a region of France : D’ANJOU PEARS

62 Not many tracks are found on them, for short : EPS

“Shazam” is a word that was coined in the “Captain Marvel” comics in 1940. Billy Batson is a boy who can transform himself into the superhero Captain Marvel (aka “Shazam”) by speaking the magic word “Shazam”.

I haven’t read the novel “Six Days of the Condor” by James Grady, but the 1975 movie adaptation “Three Days of the Condor” is an excellent thriller. The film stars Robert Redford as a relatively low-level CIA employee who gets caught up in agency politics and murders. Grady wrote a follow-up novel that was published in 1978 called “Shadow of the Condor”.

6 A student might bring this up in an intro class : GPA

In architecture, “rotunda” describes a building with a circular ground plan. Often the building has a dome, but that isn’t a strict requirement for a “rotunda”. The term can also refer to a round room within a building. The most famous example in this country is the Rotunda in the US Capitol building in Washington, D.C.

“L’Chaim!” is a Hebrew toast meaning “to life”, with “chai” being the Hebrew word for “life”.

19 Raises from the dead? : EXHUMES

Angela Bassett is an actress from New York who is best known for playing Tina Turner in the film about her life “What’s Love Got to Do with It”.

Malmö is the third largest city in Sweden, after Stockholm and Gothenburg.

The illegal distilled spirits known as moonshine can also be referred to as white lightning, mountain dew and hooch.

50 Rae who created “The Misadventures of Awkward Black Girl” : ISSA

56 Letters between two names : AKA