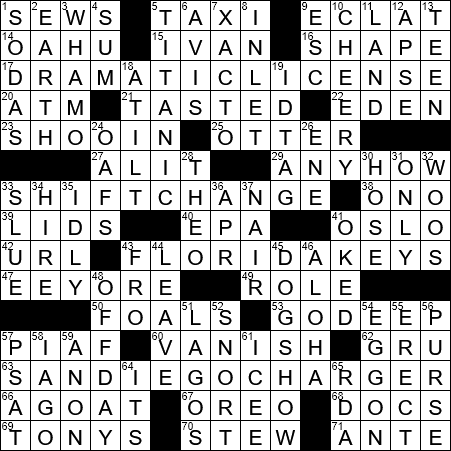 Constructed by: Brad Wilber
Edited by: Will Shortz

Themed answers end with something found in a purse:

5 Old workplace sitcom with Danny DeVito as a dispatcher : TAXI

“Taxi” is a sitcom that aired in the late seventies and early eighties. “Taxi” was the big break for a host of great comic actors including Judd Hirsch, Jeff Conaway, Danny DeVito, Marilu Henner, Tony Danza, Christopher Lloyd and Andy Kaufman.

Danny DeVito’s big break as an actor came with the role of Louie De Palma on the sitcom “Taxi”. After parlaying his success on television into some major comic roles on the big screen, DeVito turned to producing. He co-founded the production company Jersey Films which made hit movies such as “Pulp Fiction” and “Garden State”. DeVito has been married to actress Rhea Perlman for well over 30 years.

The actor Steve Carell has achieved great success on both television and in movies. On the small screen, Carell came to prominence on “The Daily Show with Jon Stewart” and then as the lead in the US version of “The Office”. On the big screen, he starred in “The 40-Year-Old Virgin”, “Evan Almighty”. My personal favorite Carell movie is 2007’s ”Dan in Real Life”, in which he stars opposite the wonderful Juliette Binoche.

The Chargers were an AFL charter team, and so the franchise was founded in 1959. The Chargers played one season in Los Angeles, before moving to San Diego in 1961, and then returning to Los Angeles in 2017.

If you take a close look at the embossed design on the front and back of an Oreo cookie, you’ll spot the main elements of the Nabisco logo. Those elements are an oval with a cross on top, a cross with two bars. Usually the company name “Nabisco” is inside the oval, but for the cookie it’s the brand name “Oreo”. The current embossed design was introduced 1952.

Wham-O was founded in 1948, with the company’s first product being the Wham-O slingshot. Since then, Wham-O has market a string of hit toys including the Hula Hoop, the Frisbee, the Slip ‘N Slide, Silly String, the Hacky Sack and the Boogie Board.

The X-Acto knife was invented in the thirties by a Polish immigrant, although his intention was to come up with a scalpel for surgeons. The knife couldn’t cut it as a scalpel though (pun!), because it was difficult to clean. The inventor’s brother-in law suggested it be used as a craft knife, and it is still around today.

April Fools’ Day is celebrated on April 1st in the Western world. In the US (and Ireland) one can make practical jokes all day long if one wants. But in the UK there is a noon deadline. Anyone pranking after midday is called an “April Fool”.

The phenomenon known as April showers really applies to the UK and Ireland. Increased occurrence of rain during April is largely due to an annual change in the position of the jet stream.

The first Westminster Kennel Club Dog Show was held in 1877, which makes it the second oldest sporting event in the country (narrowly beaten out by the Kentucky Derby that was first run in 1875). The show was originally limited to gun dogs and was established by a group of hunters who routinely met at the Westminster Hotel in Manhattan, New York.

48 Time of lackluster performance : OFF DAY

Something described as lackluster is dull, it “lacks luster”. The term “lack-luster” was probably coined by the Bard himself. William Shakespeare used is in his play “As You Like It”, which was probably written in 1599:

And then he drew a dial from his poke
And, looking on it with lackluster eye,
Says very wisely, “It is ten o’clock.

Lagos is a port and the biggest city in Nigeria. Lagos used to be the country’s capital, until it was replaced in that role in 1991 by Abuja, a city built for just for this purpose. Lagos is also the most populous city in the whole of Africa (followed by Cairo in Egypt).

61 Drink that can cause brain freeze : ICEE