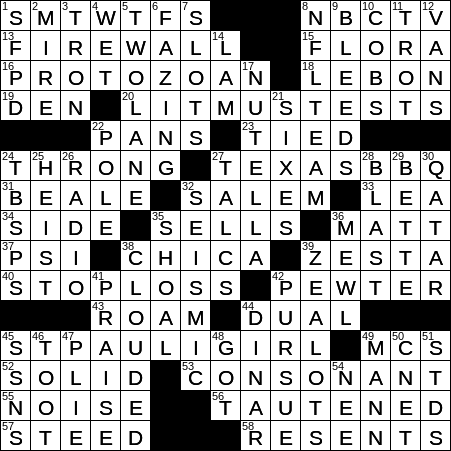 Every answer in the grid begins with a consonant, and indeed, so do the clues.

1 Series seen on many a planner or pill container : SMTWTFS

15 Food for some fauna : FLORA

The suffix “-zoa” is used for groups of animal organisms e.g. protozoa and metazoa. “Zoia” is the Greek for “animals, living beings”.

Simon Le Bon is the lead singer with the English band Duran Duran. Le Bon is a passionate sailor and garnered a lot of attention when his yacht lost its keel in the 1985 Fastnet race. Before Le Bon and his crew could be rescued, they spent 40 minutes trapped underwater inside the hull. The incident didn’t deter Le Bon from sailing though, and not long after he came third in the 1985-1986 Whitbread Round the World Race.

The hypotenuse is the longest side of a right-angled triangle, i.e. the side opposite the right angle.

Zesta is a line of saltine crackers made by Keebler.

A stop (also “stop-loss”) order is an order to buy or sell a stock once it reaches a specific price. When that “stop price” is reached, the stop order becomes a market order and the sale or purchase is made.

Pewter is a relatively soft alloy that is made up mostly of tin, with some copper, antimony, bismuth and lead.

St. Pauli Girl beer is brewed in Bremen in Germany. The beer gets its name from the former St. Paul’s Monastery in Bremen, next door to which was located the original brewery. Apparently, St. Pauli Girl is not sold in Germany, because the beer’s formulation isn’t pure enough to pass the nation’s purity laws.

3 Sci-fi film recognized with an Oscar for Technical Achievement 15 years after it was released : TRON

Nutella is a delicious hazelnut-chocolate spread made by Ferrero, a company based in Italy. Sadly, 70% of the Nutella recipe is saturated fat and processed sugar.

Rush Limbaugh is a conservative talk radio host from Cape Girardeau, Missouri. “The Rush Limbaugh Show” is the most-listened-to talk radio program in the country with 15 million listeners tuning in each week.

I must confess that I have a problem watching movies starring Bette Davis. I think I must have seen her play one of her more sinister roles when I was a kid and it gave me nightmares or something.

30 World’s richest country, according to the World Bank : QATAR

Mosul is located in northern Iraq and is the third largest city in the country, after Baghdad and Basra. It is located on the west bank of the Tigris river, opposite the ruins of the ancient Assyrian city of Nineveh in the east bank. Mosul was captured by the Islamic State of Iraq and the Levant (ISIL) in 2014. Those residents of Mosul who did not escape suffered under the rule of ISIL until the city’s liberation following the Battle of Mosul in 2016/2017.

“Toot” and “tear” are slang terms for a drinking binge.

We took our word “pirouette” directly from French, in which language it has the same meaning, i.e. a rotation in dancing. “Pirouette” is also the French word for “spinning top”.

“Doctor Faustus” is a novel by Thomas Mann first published in 1947. It is a retelling of the legend of Faust, but set in Germany in the first half of the 20th century.