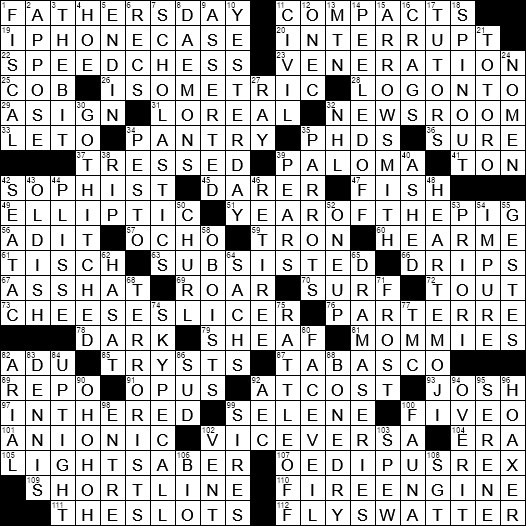 Today’s Title: Not in So Many Words

Happy Father’s Day, everyone! Unusually, today’s puzzle is a themeless crossword, although there’s a starting reference to today’s celebration:

1 It was first officially designated in a 1966 Lyndon Johnson proclamation : FATHER’S DAY

26 Static, as an exercise : ISOMETRIC

The word “isometric” comes from Greek, and means “having equal measurement”. Isometric exercise is a resistance exercise in which the muscle does not change in length (and the joint angle stays the same). The alternative would be dynamic exercises, ones using the joint’s full range of motion.

A sophist is someone who engages in devious argument. Originally “sophist” described a wise or learned person, but over time it has become a term of contempt. Our word “sophisticate” comes from the same Greek root.

An adit is specific type of mine access, a horizontal shaft that extends into the mine. This can be compared with the more traditional vertical shaft that is used for access into most mines. Adits make sense when the ore is located inside a mountain or hill, as opposed to “underground”, as they allow the mine entrances to be on the valley floor.

59 Arcade game based on a film of the same name : TRON

New York University (NYU) is comprised of fifteen schools, one of which it the Tisch School of the Arts. The Tisch is famous for its acting program, with notable alumni such as Debra Messing, Christopher Guest and Josh Radnor.

78 Word before web or chocolate : DARK

“Dark web” is the name given to content on the World Wide Web that requires specific software and/or authorization for access. The dark web is a subset of the “deep web”, the collection of content on the Web that isn’t indexed by search engines. Dark web users refer to the regular Web that you and I access as “Clearnet”.

Freddy Adu is an American soccer player who grew up in Ghana. Adu signed for D.C. United in 2004 when he was only 14 years old. That made him the youngest athlete ever to sign a professional contract in the US.

85 Dates not found on the calendar : TRYSTS

In its most general sense, a tryst is a meeting at an agreed time and place. More usually we consider a tryst to be a prearranged meeting between lovers. The term comes from the Old French “triste”, a waiting place designated when hunting. Further, a tryst taking place at lunchtime is sometimes referred to as a nooner.

99 Greek goddess of the moon : SELENE

“Five-O” has become urban slang for a police officer, or the police force in general. The term is rooted in the 1970s TV Show “Hawaii Five-O”. Hawaii Five-O was a totally fictional police force created for the television show. The name recognizes that Hawaii was the 50th state to join the union. Steve McGarrett in the original show was played by Jack Lord, and “Danno” Williams was played by James MacArthur.

105 Weapon with a distinctive hum : LIGHTSABER

Lightsabers are energy weapons used by the Jedi and the Sith in the “Star Wars” series of films.

15 Sinclair Lewis novel for which he received (but declined) the Pulitzer Prize : ARROWSMITH

“Arrowsmith” is a 1925 novel by Sinclair Lewis. It recounts the life of doctor and scientist Martin Arrowsmith. At one point, Arrowsmith is sent to study the bubonic plague on an island in the Caribbean. While on the island, Martin’s wife Leora contracts the disease and dies.

In an Ancient Roman naming convention, the higher-class male citizens were had three names. First came the “praenomen”, which was the given name. Second was the “nomen”, the person’s clan or “gens”. Lastly came the “cognomen”, the family line with the clan.

Cicero was a very influential senator in ancient Rome in part due to his renowned ability to deliver a persuasive speech. His full name was Marcus Tullius Cicero.

A churl is rude, boorish person. The word “churl” comes from the Old English word “ceorl”, meaning a freeman of the lowest class.

Our word “gest” meaning a great deed or an exploit has been around since about 1300, and comes from the Old French word “geste” meaning the same thing. These days “geste” can also mean “gesture”.

58 They’re found among the reeds : OBOISTS