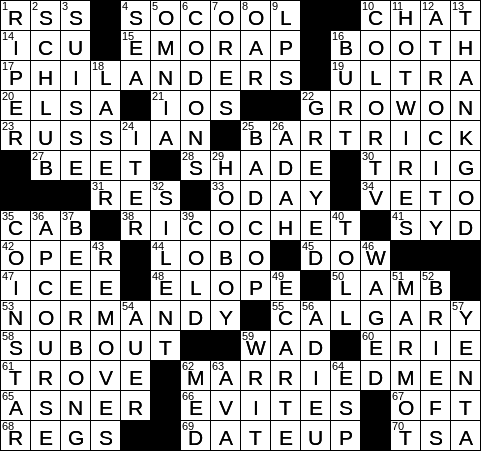 Themed answers are common words and phrases that can be parsed into two MEN’S names:

The timber wolf is also known as the gray wolf, tundra wolf or lobo.

48 What Romeo and Juliet plan to do : ELOPE

“Agnus Dei” is Latin for “Lamb of God”, The expression is used in Christian traditions to describe Jesus Christ, hence symbolizing his role as a sacrificial offering (sacrificial lamb) to atone for the sins of man.

The original Fort Erie was built by the British in 1764. The current structure can be visited today and is located in the province of Ontario, just across the Niagara River from the city of Buffalo, New York.

“Up” was the tenth movie released by Pixar studios, and features the wonderful animation that we have come to expect from Pixar. The film earned itself two Academy Awards. The main voice actor is Ed Asner, whose animated persona as Carl Fredricksen was created to resemble Spencer Tracy, as Tracy appeared in his last film, “Guess Who’s Coming to Dinner”.

4 Setting for much of the “Odyssey” : SEA

Proteins are synthesised in the body from amino acids, which are linked together in specific sequences that are determined by the genetic code. The language of the code is sequence of nucleotides. The nucleotides are arranged in groups of three called “codons”, with each codon determining a specific amino acid.

7 Bauxite and others : ORES

Bauxite is an aluminum ore. It takes its name from the absolutely beautiful village of Les Baux in southern France, the home of the geologist who first recognized that the mineral was a useful source of the metal.

Composer and pianist Burt Bacharach had an incredible run of hits from the fifties through the eighties, usually working with lyricist Hal David. Bacharach’s hits ranged from “Magic Moments”, a fifties hit for Perry Como, “Close to You”, a sixties hit for the Carpenters, and “Arthur’s Theme”, a hit for Christopher Cross in the seventies. Bacharach was married to Angie Dickinson for fifteen years.

51 Animal in the squirrel family : MARMOT